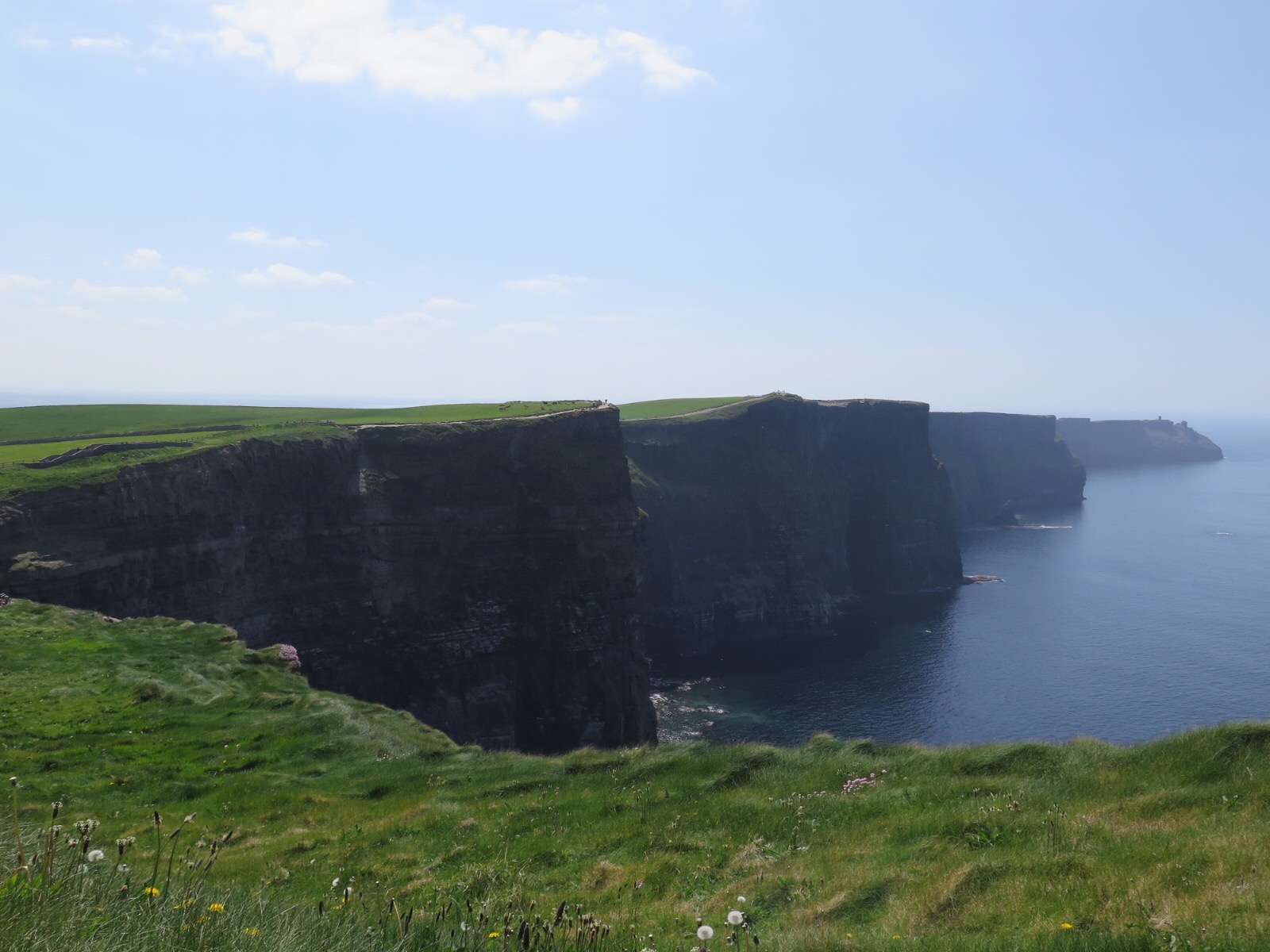 After our stay in Galway, we headed south along the Wild Atlantic Way towards Dingle in County Kerry. It was about a three-hour drive from Galway to Dingle, and we made a couple stops along the way. 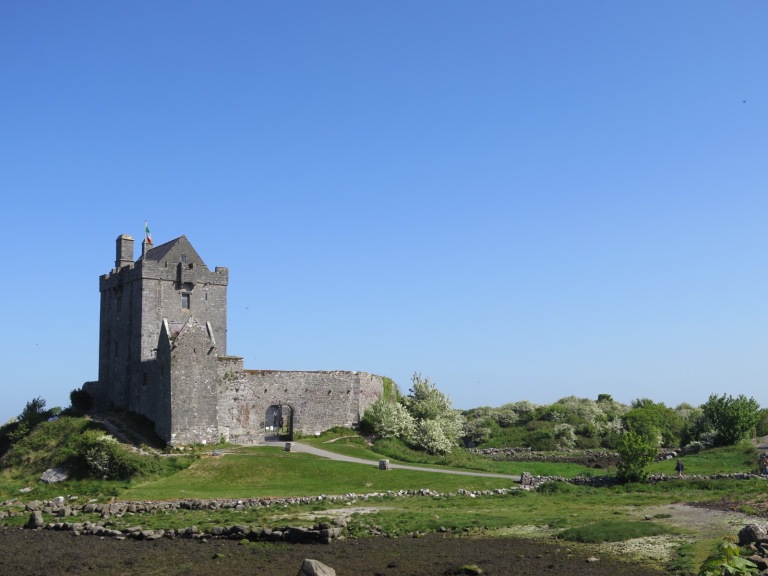 The first stop was another medieval castle, Dunguaire castle in Kinvarra. It was interesting to wander around it as it was relatively intact, compared to other castles we’ve seen here. But otherwise it was not terribly exciting.

Our next stop was Poulnabrone, a Neolithic portal tomb. It was pretty awesome to see! The tomb consists of three large standing stones: two standing vertically and one placed on top like a roof. It’s crazy to imagine how people could have constructed these things without the cranes and tools that we have today. There are a lot of Druidic and Neolithic sites sprinkled throughout Ireland, especially in the Burren and in western Ireland, so we are always on the lookout for them but this was a very cool example. It’s also amazing because this ancient site is just smack-dab in the middle of some fields of sheep and cows, and people live not far from it.

It is very interesting to see the way the architecture from each different historical period is just mixed in with contemporary buildings all over Ireland. We’ve seen the ruins of medieval buildings next to Neolithic standing stones, with famine cottages and contemporary houses nearby. It seems that buildings are never dismantled here; people just keep using them until something new is built and either repurpose the old building or just leave it to mercy of the elements, the moss, and the ivy. 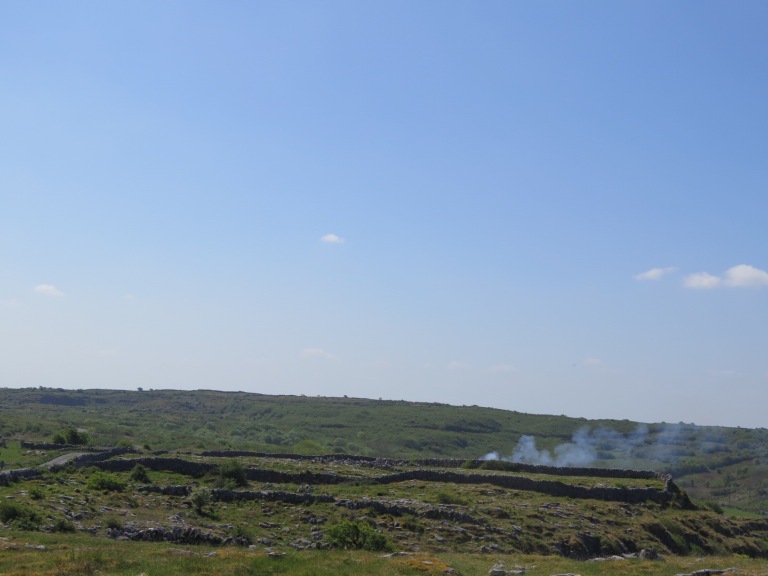 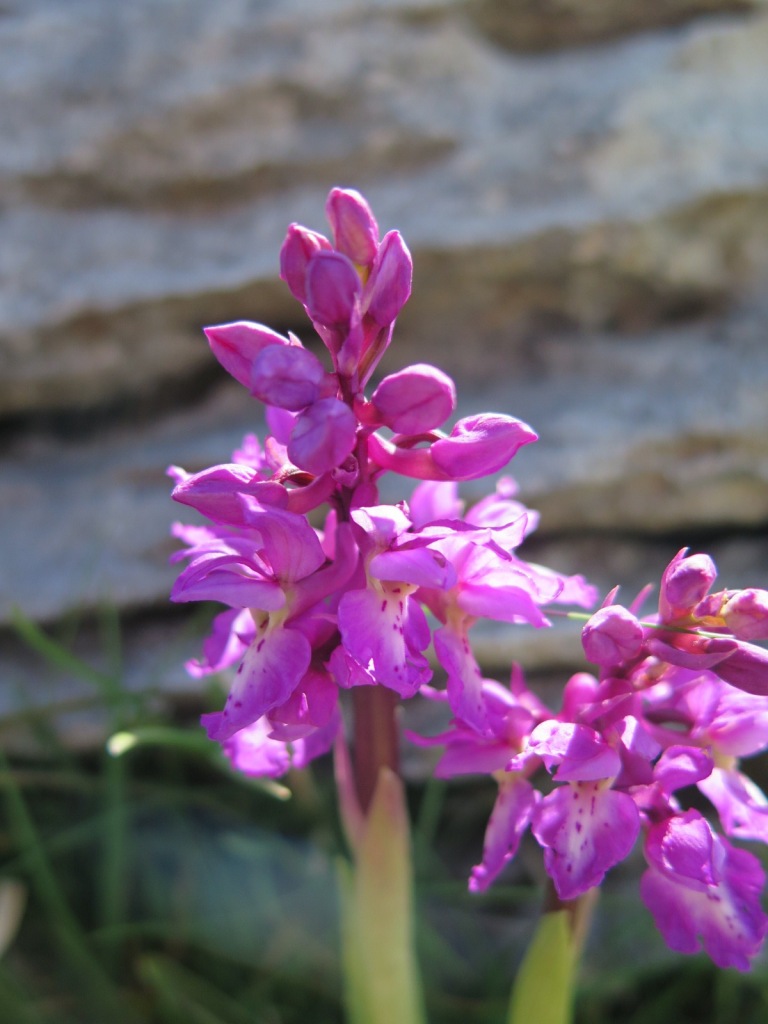 After exploring the portal tomb and surroundings, we headed towards the Cliffs of Moher. Driving along the Wild Atlantic Way already provides some pretty incredible coastal and cliff views, but the Cliffs of Moher definitely deserve all their acclaim. We wandered along the cliff edge for a while and I tried not to get too close to the edge. We lucked out again with the weather and got a beautiful sunny day, although it was quite windy. I don’t imagine that the Cliffs are nearly as scenic with the stereotypical Irish weather of fog and clouds, so we were happy that our timing worked out! 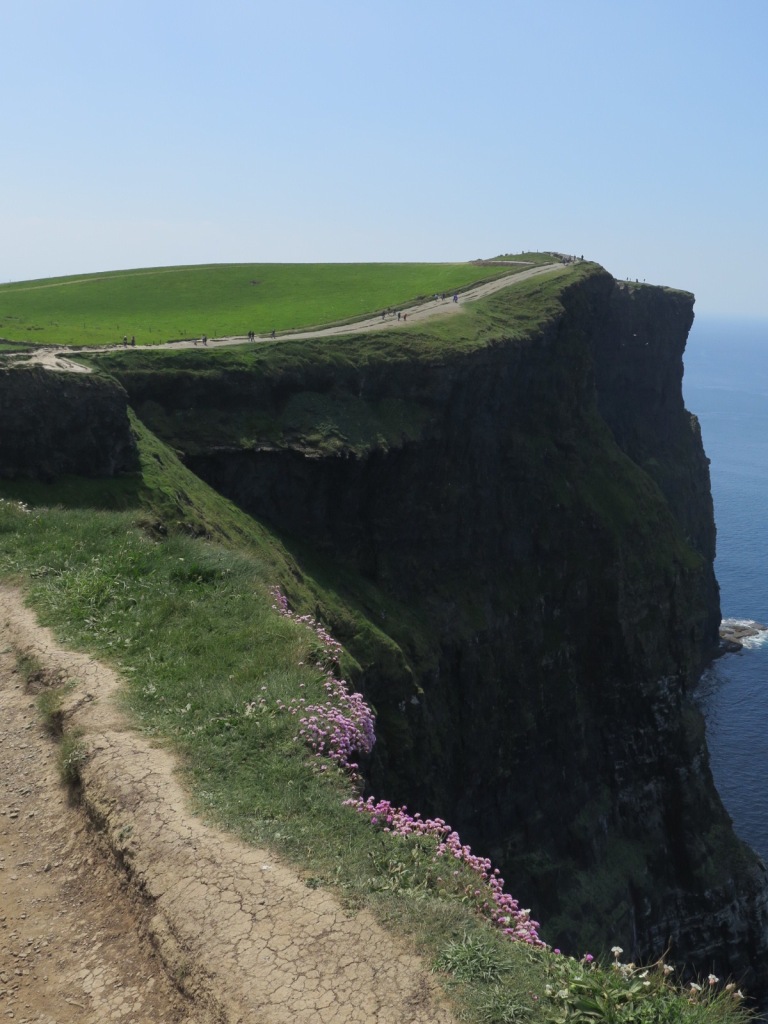 Once we’d had enough of the beautiful views (and the crowds…) we got back on the road since we had quite a long drive still ahead of us. We arrived in Dingle in the early evening, then wandered around the small town for a little while. After dinner in a pub near the waterfront, we headed back to our Airbnb to do some work and get to bed early. Dingle is known for it’s live music scene—most of the pubs have live acoustic music every night—but we were feeling pretty wiped from our long day of driving so we decided we needed a night in and would check out the music the next night.

Wednesday morning we decided to go on a bit of a hike before exploring more of the town. Mount Brandon is the ninth-highest peak in Ireland (the tallest outside of Macgillycuddy’s Reeks) and is named after St Brandon who was supposedly born in County Kerry; so it’s a very sacred place and many people take a pilgrimage every there year. The stations of the cross are marked along a trail from the base to the very top of the mountain where there are the remains of a stone building that may have been used by St Brandon.

The hike up the hill was pretty steep but afforded us beautiful views of the Dingle peninsula all the way up. There were sheep just wandering all across the hillside and even up towards the peak. We started the hike in grassy fields and then by the top we were hiking through large slate boulders and slabs. There were clouds coming in across the peak so we didn’t get much of a view once we made it to the top and it was very cold and windy. 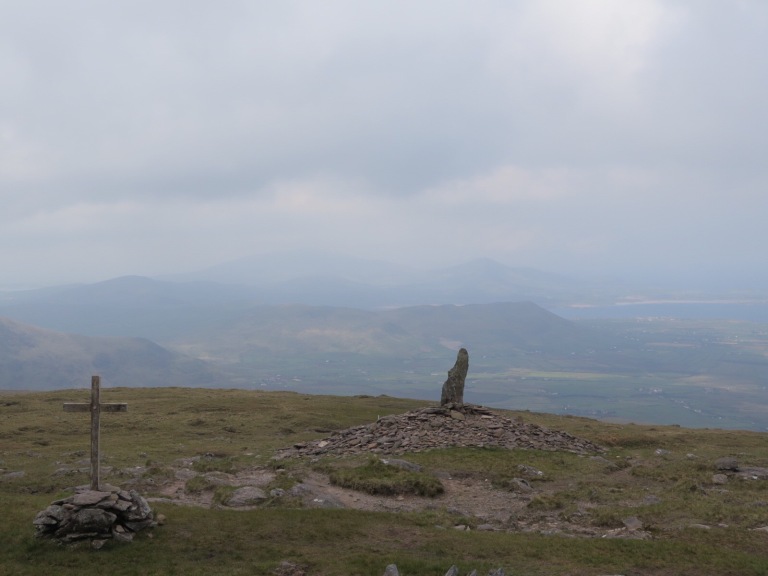 After we got in our 10,000 steps up to the top of Mt Benjamin and back, we did some more wandering around Dingle town. I had heard that Murphy’s ice cream in Dingle is really good so we stopped in there before going on a walk. I got caramelized brown bread ice cream and Irish coffee ice cream which were both very good! I also tried the gin ice cream which did, in fact, taste like gin. We walked around a park by the water and enjoyed some lovely views of Dingle. 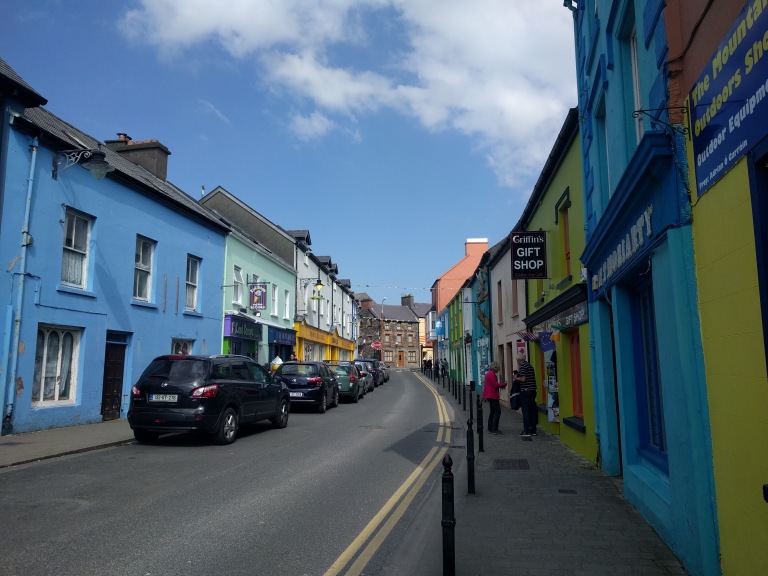 Dingle, like many towns in Ireland, is filled with incredibly colorful buildings so it’s really fun to just walk around. There is an initiative called Tidy Towns in which cities across the country compete with each other to become the “tidiest town in Ireland.” The theme one year was to see who could be the most colorful, so as a result a lot of the towns are full of super bright colors! It’s like a candy shop in the sunlight, but I could also see how it makes towns much more cheerful-looking in the grey fog.

There is a distillery in Dingle which makes gin, vodka, and now whiskey; we wanted to visit it and walked all the way to the distillery but by the time we got there the tour had already been sold out. 😦

We went into town for dinner and then went to a pub that Matt and Kelley had recommended we got to for live music. We had a pint while we listened to some great trad music: a man on the guitar and a young woman on the fiddle. The fiddle player was incredible! She could play very quickly and was just following the guitar player by watching his hands, they didn’t have sheet music or anything. She also had a beautiful singing voice. The pub was very traditional, with very low ceilings (I’m not sure how Matt was able to fit inside!); it was a very cool experience.

​
At the pub we ended up sitting with an older couple visiting from Seattle, and the husband was born and raised in Walls Walla (the very small town in Washington where I went to college)! What a small world.

After our pints, we decided to go check out another pub and see if we could find more music. Our ears led us across the street to a much rowdier pub with two guys playing some very upbeat music, one guy on the accordion and one on the guitar. It was fun but the musicians in the first pub were definitely better. This pub had great people-watching, though! There must have been something happening in town because we watched a seemingly-endless parade of kids in their late teens or early twenties stream into the bar in their club-wear. We were just standing in the front of the bar and couldn’t see the back, but I imagine it was like a Harry-Potter-esque room that kept growing as people went into it. So at least it was an entertaining experience!

Up next: Slea Head Drive, Killarney, and the Ring of Kerry.