We headed out from Dingle on the early side on Thursday morning to drive along the Slea Head Drive, a scenic driving loop around the Dingle Peninsula. It was incredibly beautiful! We were mostly along the coast so got some amazing views off the cliffs and of the nearby islands.

We also made a couple stops, the first of which was a very cool promontory fort called Dunbeg Fort that was originally constructed around the 8th and 9th centuries AD. The main building used to be a beehive fort (an enclosed conical structure made of stones that kind of resembles a beehive); it has since collapsed and is now just a circular stone wall, but you can still see how the walls start to curve up to form the beehive. It’s pretty amazing to be standing inside a structure that was inhabited millennia ago but which is still standing!

After sufficiently soaking up some ancient history, we headed back on the drive. Parts of the road along the Slea Head Drive are very narrow and there are lots of tour buses along the route. Everyone is encouraged to drive the same direction (clockwise) around the loop, because otherwise you could get stuck having to pass an oncoming tour bus on a narrow one-lane road.

We also stopped to wander along a pretty beach for a few minutes. The beach was very nice, but the views from the hill above the beach were especially spectacular. 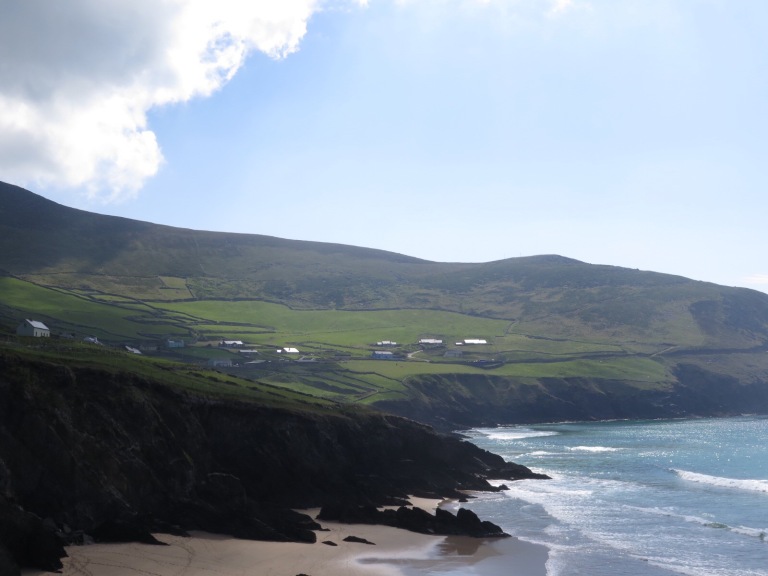 We passed through Ballyferriter where parts of “The Force Awakens” and the newest “Star Wars” movie coming out later this year were filmed, so that was pretty neat. (For the record, we didn’t seek this out but we saw the signs about it all over the place!) The cliffs on this part of the coast were pretty incredible: as you head towards the water, the land sweeps steeply upward (like half of a shallow parabola) before it completely drops off into the sea. I imagine that millennia ago the land was shaped by a glacier, and then part-way up one side of the glacial valley the land just got sheared off into the ocean.

The Slea Head Drive is a loop so we ended up back in Dingle. From there we headed towards Killarney National Park and the Ring of Kerry. We got into Killarney in the middle of the afternoon and did a bit of a walk around the lakes at Muckross House, in the national park, which were very pretty. Several people had said that Killarney city was not worth staying in because it’s a big tourist trap, so we had a room at B&B in Kenmare, about a 20-minute drive from Killarney.

After dinner in Kenmare we went to a pub in town with live music and had another pint while we listened to the guitar player. He was very good but he played a lot of covers of older American songs which aren’t quite as exciting when you are in a new country and trying to soak up the local culture… oh well!

We got a fairly early start on Friday morning to drive the Ring of Kerry, a 180km-long road which winds through the mountains and plains of County Kerry. Similar to the Slea Head Drive, the Ring of Kerry is a big tourist destination and there are a lot of giant tour buses on the narrow roads. All tour buses have to drive counterclockwise around the Ring of Kerry and we had heard that if you don’t want to get stuck behind the throngs of tourists you should go around clockwise, which we did.

You could spend days doing the Ring of Kerry and stopping at every single vista and point of interest, but if you want to complete it in a day you definitely have to pace yourselves. We did make a couple of stops: a few beaches, an old house with lovely gardens, and a lot of vista points. 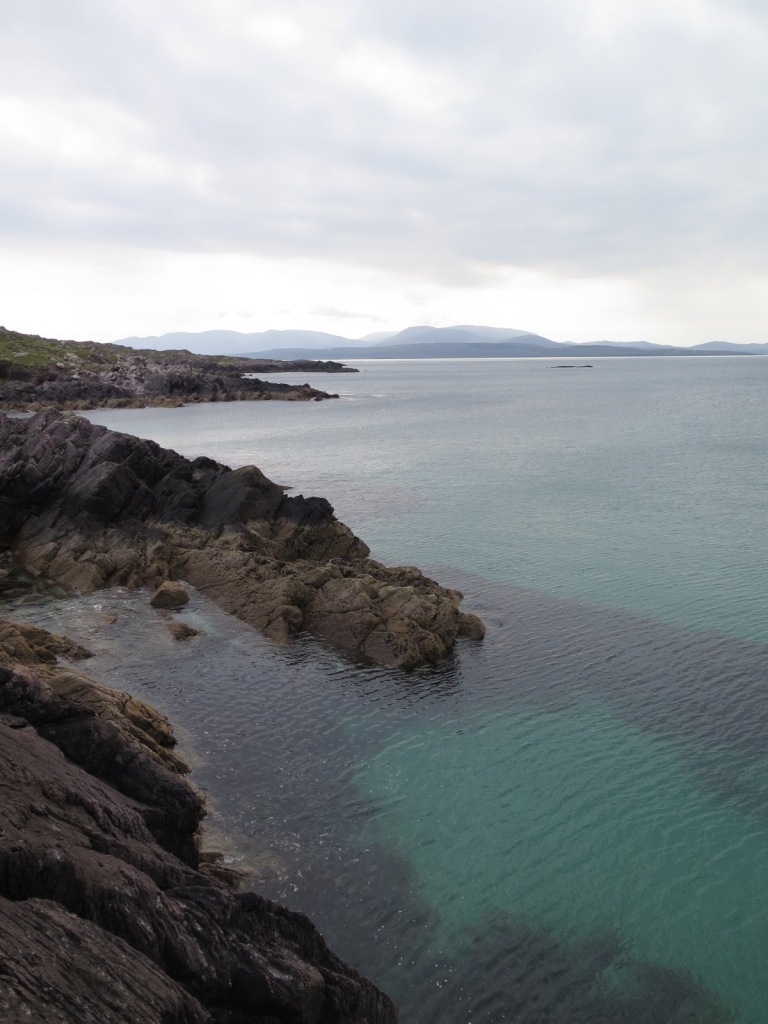 It’s also pretty to just drive along the road even if you don’t really stop. As with most Irish roads that we were on, there are no shoulders and the hedges, trees, and bushes come right up to the edges of the road. The result is that you end up driving through a green tunnel, trimmed only by the passing cars (on roads that trucks and buses use more often, the tunnels are taller than on less popular roads). It is very pretty, until you realize that there is oncoming traffic on a one-lane road and you don’t have a shoulder to pull off to!

Our guide book suggested taking a bit of a detour from the Ring of Kerry to stay along the coast a big more and see the Skellig Islands. We took the suggestion and are really glad we did because we got to see some amazing views and not as many tourists! We visited the “Most Spectacular Cliffs in Kerry” which were, in fact, quite spectacular. We ate a quick lunch in the car because the weather was starting to pick up and get a bit drizzly. 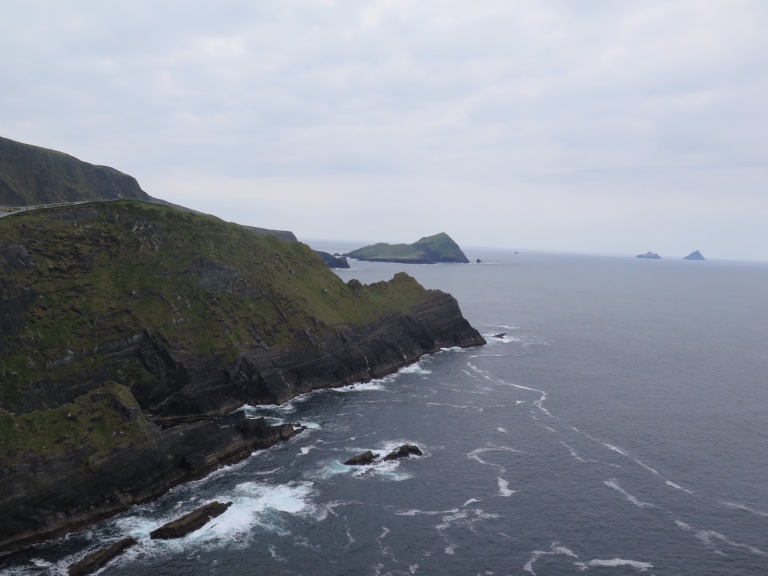 This detour was also interesting because it led us through a Gaeltacht district. While almost everything posted on official signs in Ireland is posted in both English and Irish Gaelic, the Gaeltachtaí are regions of the country where Gaelic is spoken pretty much exclusively. These regions are marked by signs (“An Gaeltacht”), and you see almost nothing written in English when driving through. It’s pretty interesting to see! And to try to sound out the Gaelic words in my head.

We got back on the Ring of Kerry for a while and then took another detour to the Gap of Dunloe which I had heard was very pretty. Our guide book said that it’s definitely a park-the-car-and-walk-it type of road so we parked at the nearby pub and then ventured forth. The road through the Gap of Dunloe is one lane, very narrow, and quite bumpy. We walked through the stunning valley with little pastures full of sheep, a picturesque stream, and some abandoned stone houses.

We made it almost to the other end of the Gap before deciding to turn around. The guide book had warned that the road would be full of people and jaunty cars, but we actually didn’t see that many of either! And we did see a fair amount of people driving it, so we decided that we could do it too. It was later in the day and I think the dark clouds had scared a lot of people away so we didn’t actually have much trouble navigating through the Gap! We were glad to have walked it first so that we could actually see more and enjoy it.

After the Gap of Dunloe, we still had a bit of a drive along the Ring of Kerry to get back to Kenmare and our B&B. This is what our Ring of Kerry adventure looked like:

We cleaned up and then walked into town for dinner. Martin had read about a restaurant in town so we treated ourselves a bit to something that wasn’t pub food. We followed up dinner with a pint at the same pub from the night before, who had live music again. We are definitely starting to hear a lot of the same Irish songs! I even knew the right places to clap for one of the songs, and I now have “Molly Malone” stuck in my head.

Next: On to Cork!