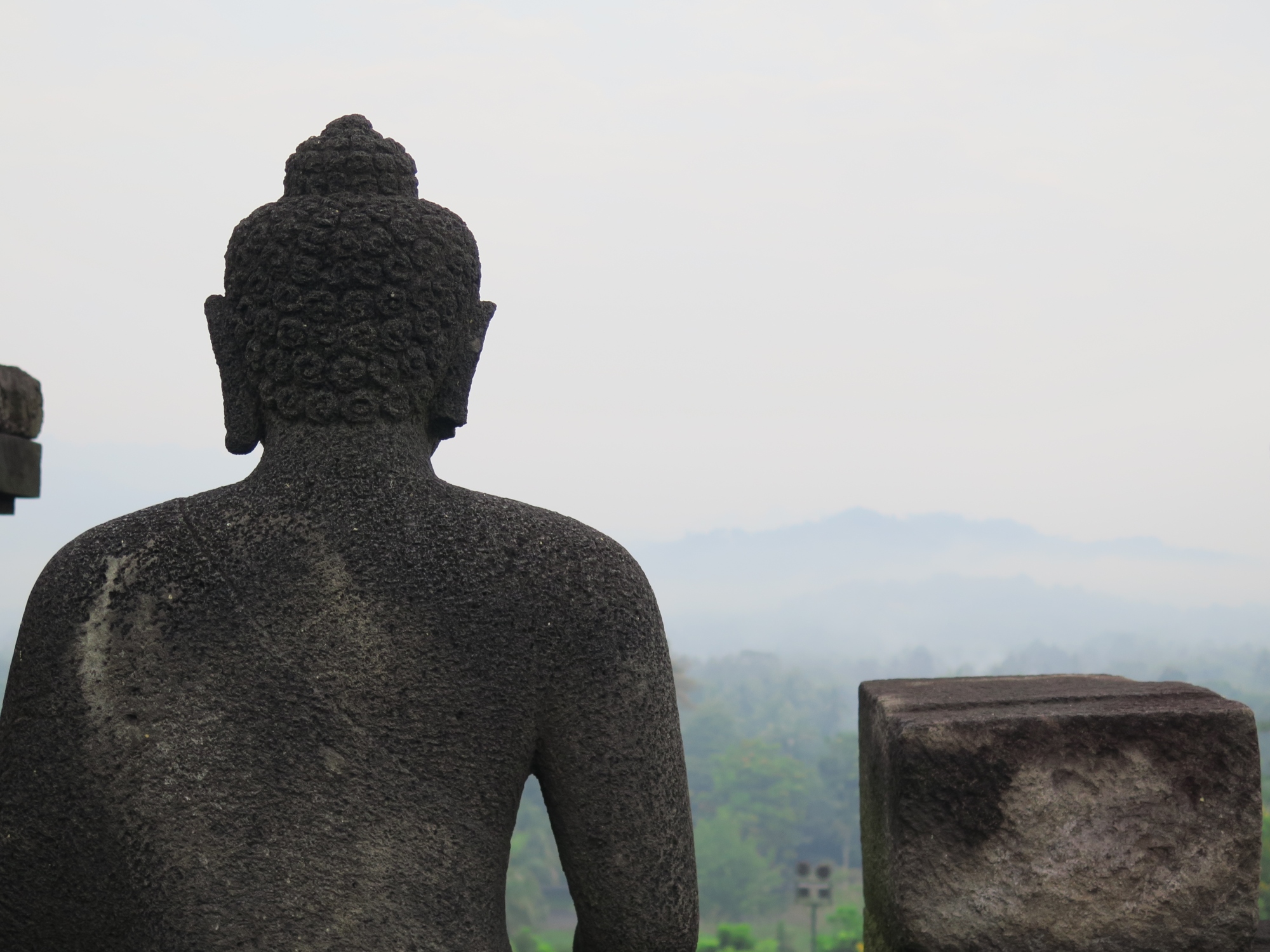 Indonesia is a huge country with tens of thousands of islands, each of which pretty much has its own individual culture and identity. So, when deciding where else to go in Indonesia we narrowed it down to islands easily reachable from Bali since we already knew we wanted to spend time there. Given those parameters, our research repeatedly brought us to Central Java and the Special Region of Yogyakarta (“jog-ja-karta”). That region sounded really great so we decided to go for it and spend some time in the city of Yogyakarta and then a few days in the more rural area around Wonosobo.

Yogyakarta’s designation as a “special region” means that the monarchy of Yogyakarta has certain autonomies despite being part of the Republic of Indonesia. The Royal Family still lives in the Royal Palace and Yogyakarta is a stronghold of Javanese traditions, arts, and culture. All of our research also touted Yogyakarta as a hotbed of contemporary art with an exciting food scene. This all really appealed to us and so we were excited to check it out.

Unfortunately I think we weren’t quite adequately prepared for our visit to Java. The weather was pretty unbearably uncomfortable: With daytime highs in the low-to-mid 90s and 85% humidity, we almost never wanted to be outside for more than a few minutes and changed to non-sweaty clothes every time we returned to the hotel. That made it hard to be excited about walking around to explore all of the cultural sites. We also managed to miss the part of our guide book that warned readers about potential scams to be on the lookout for, so we ended up naively chatting with and then following several locals only to realize they had all been misleading us. So, we didn’t feel like we got to enjoy all of the amazing cultural and traditional experiences that Yogyakarta has to offer due to the heat, the crowds, and a general feeling of not being sure what was legitimate and what was nonsense for Western tourists.

Just wandering around the city, we did see some amazing street art and it was clear to us that there is a vibrant contemporary art scene there. Almost every wall was filled with art; be it political, surrealist, abstract, or just geometric patterns and textures, everything looked so cool and provided an intriguing juxtaposition to the traditional heritage and Muslim culture. Where it was hard for us to tell which of the traditional arts were legitimate and we were hesitant to wandering into shops since we weren’t interested in purchasing anything, the street art felt like an authentic expression of the city.

We spent some time checking out the sites of Yogyakarta—the Kraton (the sultan’s palace), the “water palace” and underground mosque of Taman Sari, and generally wandering the streets—but we also spent a fair amount of time hanging out in coffee shops and getting some work done. 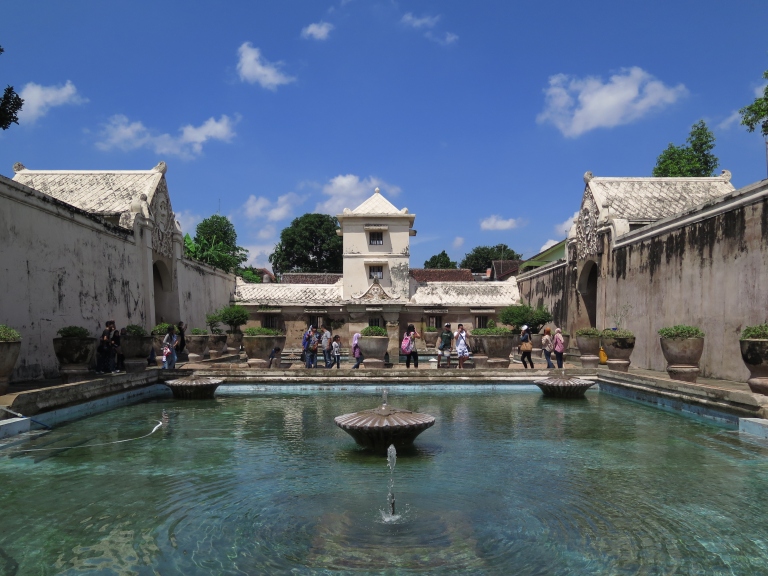 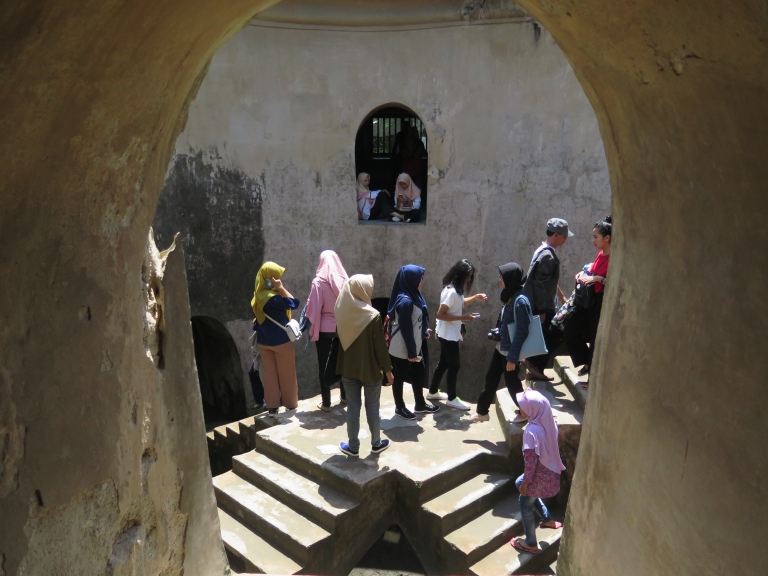 There were plenty of hipster cafes to check out, and of course they have really good coffee. And it was so hot that we felt justified in getting ice cream most days (also really good ice cream!). We noticed that lots of young people would go out for ice cream late in the evenings, in the same way that we might go out for a drink with friends in the States except that they don’t drink alcohol as it is a Muslim culture. We ate quite well in Yogyakarta, and highlights include bakmi jawa noodle soup (we went twice!) and an “expensive” meal at a Mediterranean restaurant where we had the best $5 duck confit served with waaaay too much potatoes au gratin.

Java is predominantly Muslim, despite being home to some of the oldest Buddhist and Hindu temples in the world. Even after visiting Morocco and other Muslim areas, we found the concentration of mosques to be the highest around Yogyakarta: We never walked more than a hundred feet without seeing a green dome, and we got proficient at telling time by the call to prayer (especially at 4:30am…).

We got out of Yogyakarta for a couple of day trips: One to see the Buddhist temple Borobudur, and one to see the Hindu temple Prambanang. The thing to do is to go to Borobudur before sunrise and watch the sun come up over Java (and also avoid the crowds!). Just like at Angkor Wat, we opted not to do that. Instead, we got on a shuttle at 4:00am for the ninety-minute-plus drive from our hotel to get there shortly after sunrise. We were glad we hadn’t tried for the sunrise tour since with so much pollution in the air it probably would have been disappointing (we could barely see any of the landscape…). We still got a few hours to explore the temple before the major crowds and the heat set it.

Built around the 9th century AD, Borobudur is certainly a standout among the temples we explored. There are many intricate bas-reliefs which depict images from ancient Javanese life as well as stories from Buddhism. But the most spectacular aspects are the seventy-two small stupas on the upper terraces. Each bell-shaped stupa has cutouts in the stone, making it look like a basket, and contained within each is a mini statue of Buddha. It was very unique and beautiful. One of the things that stood out to us at Borobudur, though, was that to the domestic tourists we (as white people) were almost as much of the attraction as the temple itself: We were followed around by high school and college students who wanted to practice their English and who kept giggling whenever they saw us; and we were asked by several Indonesian tourists to take photos with their families, which was a new experience for us. 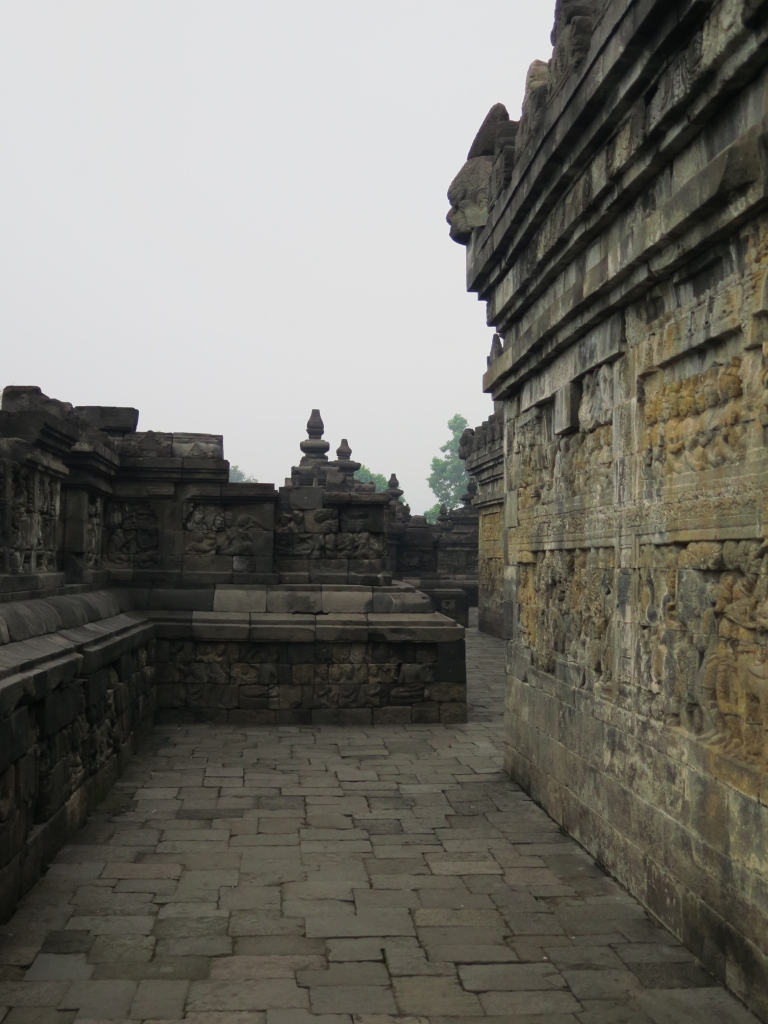 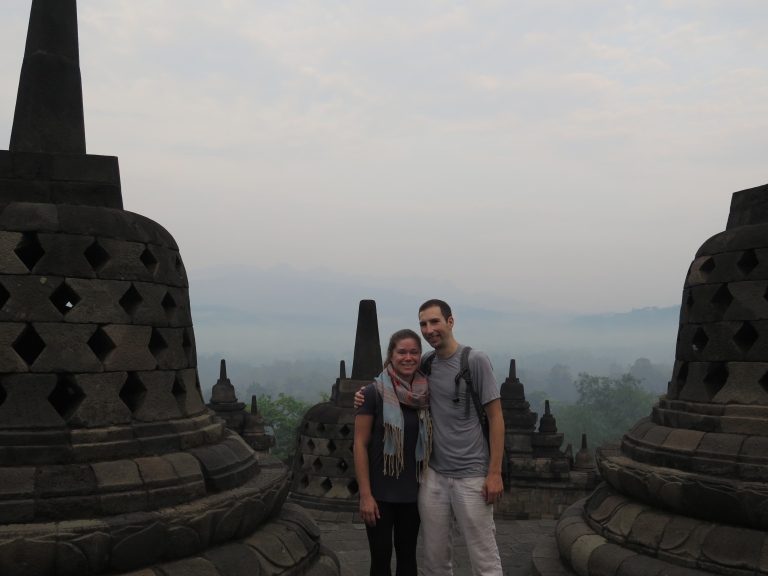 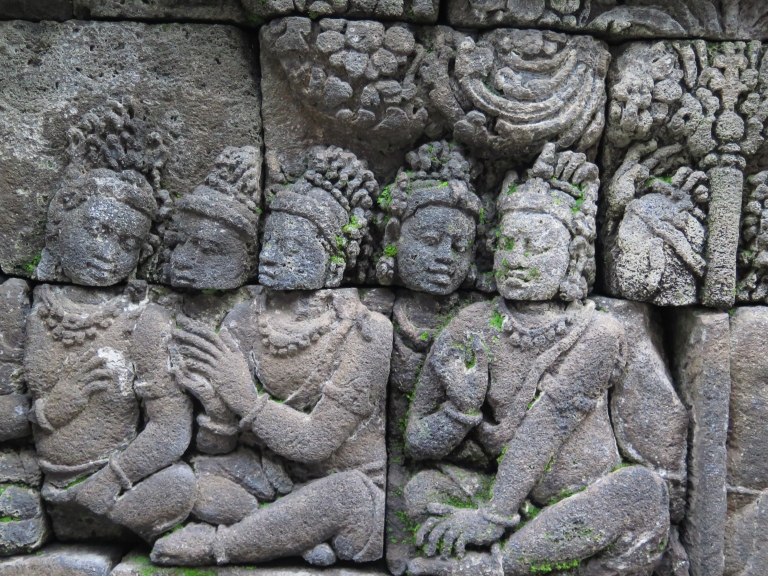 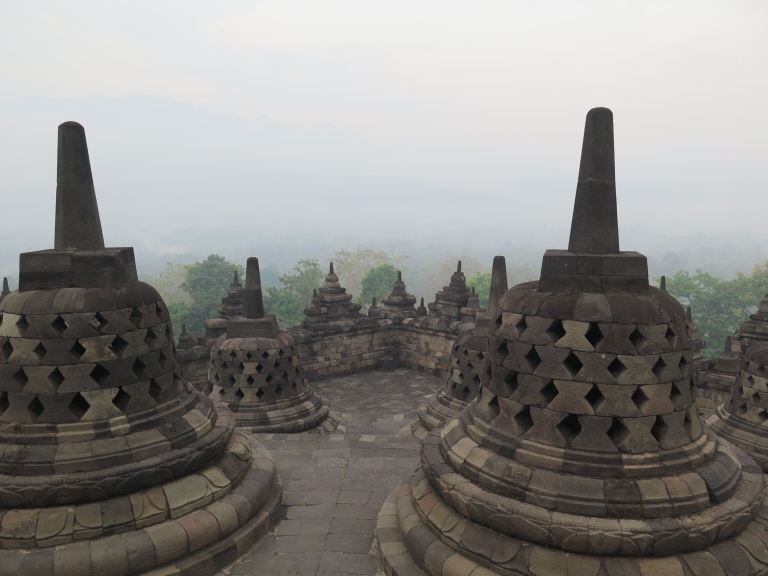 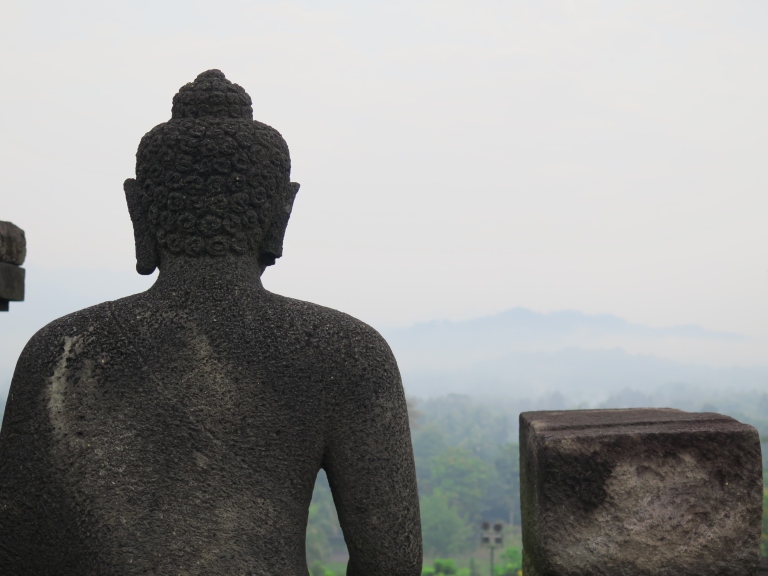 The next day we tried for the sunset visit of Prambanan but the heavy pollution meant that we couldn’t quite see the sun setting, and the late afternoon torrential downpour meant that we headed back to the car a bit early. The architecture of Prambanan is quite different from Borobudur: It consists of several different temples of various sizes dedicated to the Hindu gods and various aspects of their lives. There were many many more temples included in the complex but most fell down during past earthquakes, and many of the statues in the temples were stolen over the years. We got a tour of the temples and shrines by some high school students who were doing a program to practice their English, which was quite informative if a little quick since they were so eager that they practically ran through their prepared talk. We also wandered a bit around the other temples near Prambanan, which were also very cool but had not been repaired/maintained the same way as the main Prambanan complex so there wasn’t quite as much to see. 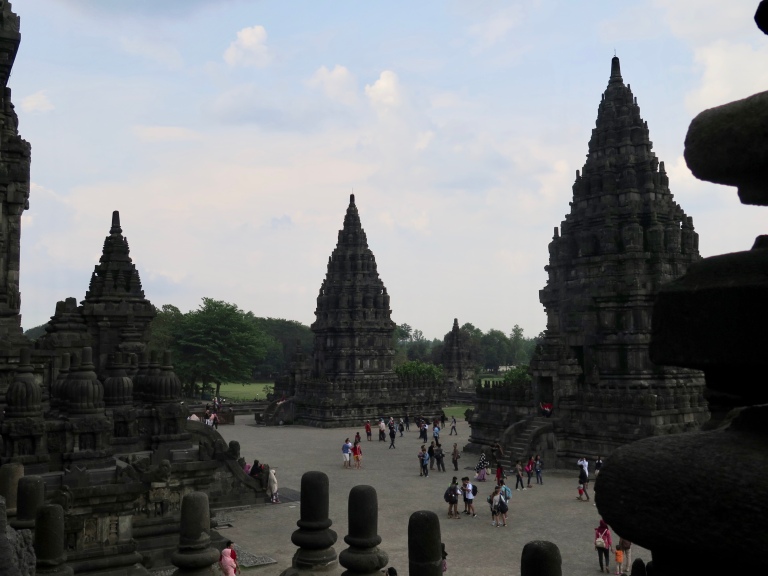 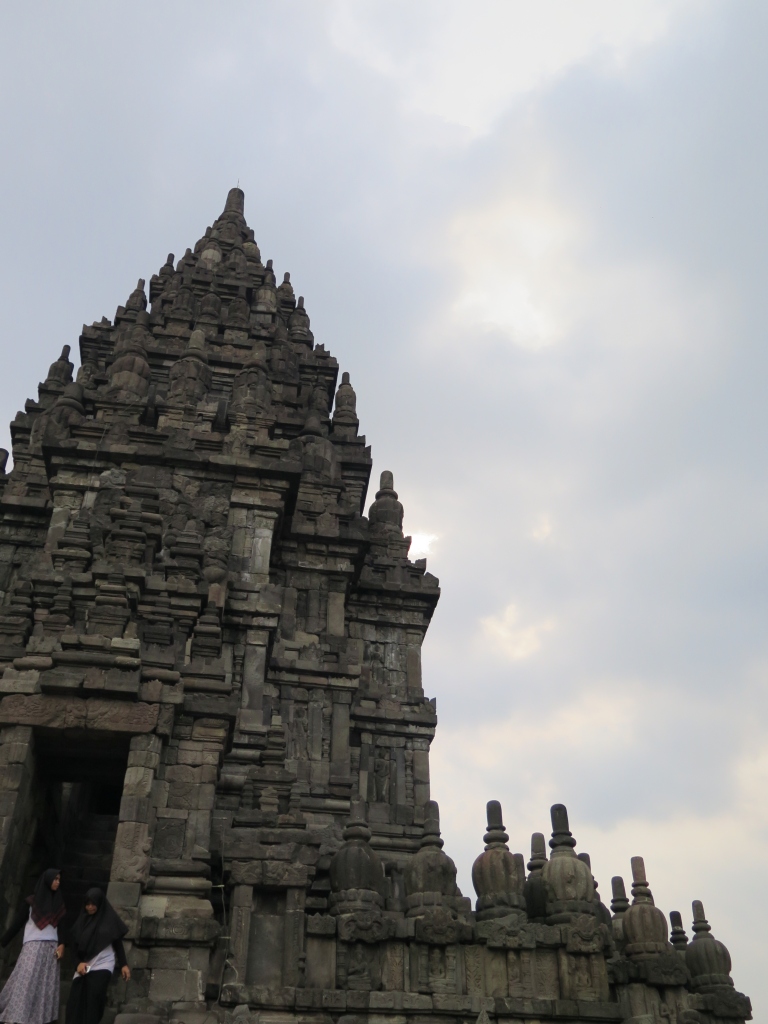 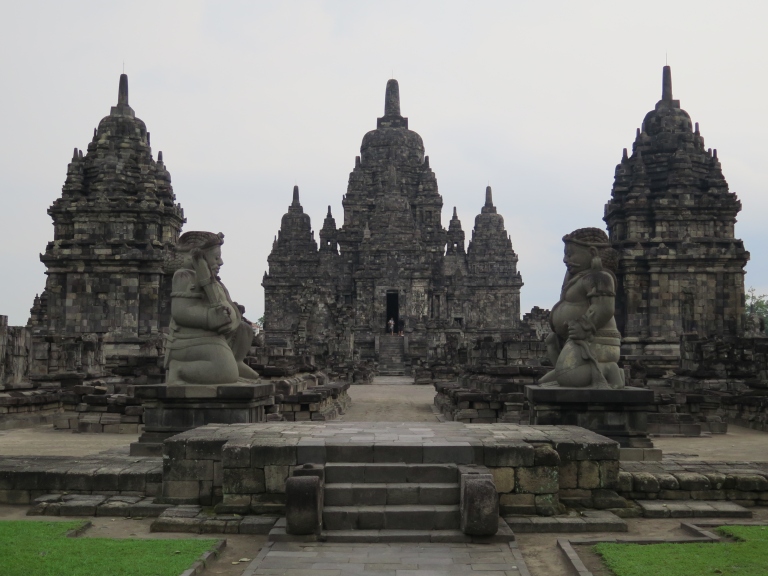 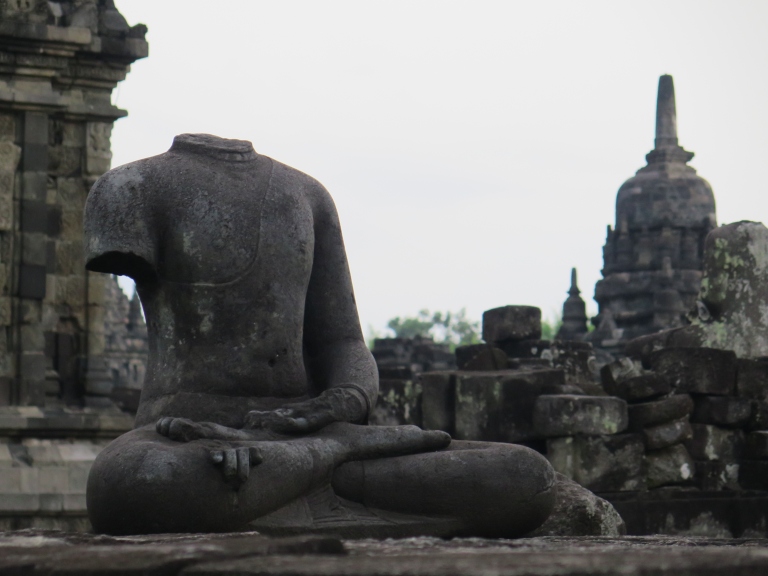 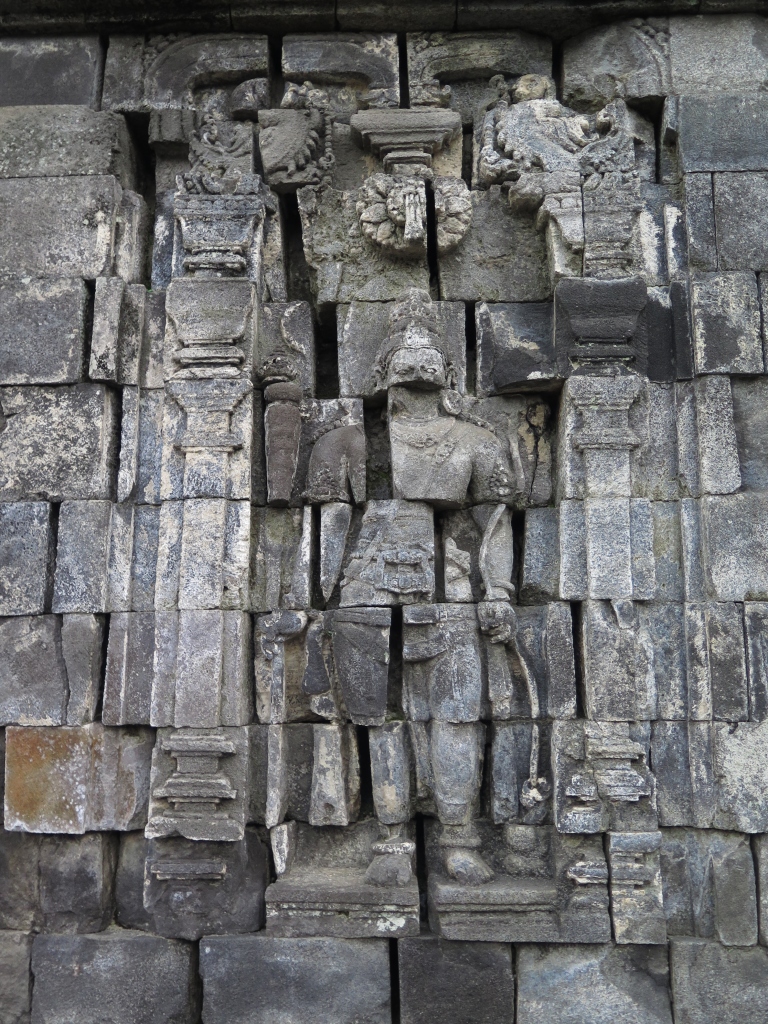 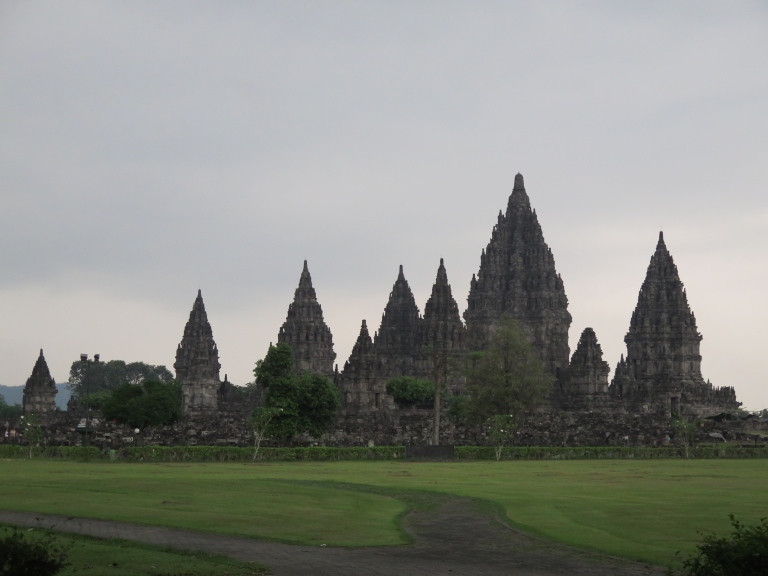 After a few days in Yogyakarta we headed northwest to Wonosobo in the central mountain range of Java. (Fun story: we ended up paying a Grab (Uber in SE Asia) to take us the 3+ hour drive because it was way easier than trying to figure out public transport, and not very expensive!) We spent just two nights in Wonosobo and our main objective in the area was to explore Dieng, a volcanic plateau north of Wonosobo. It’s a pretty stunning landscape, with rolling green hills textured heavily with terraced fields, ancient Hindu structures (the area is called “Abode of the Gods” and at one point was covered in hundreds of temples although only a handful are standing today), epic mountain views (when you can see them!), tiny villages,  and plenty of geothermic activity, like bubbling sulphur pits and multi-colored lakes. We did a bit of a DIY walking tour around Dieng and enjoyed the relatively temperate weather. 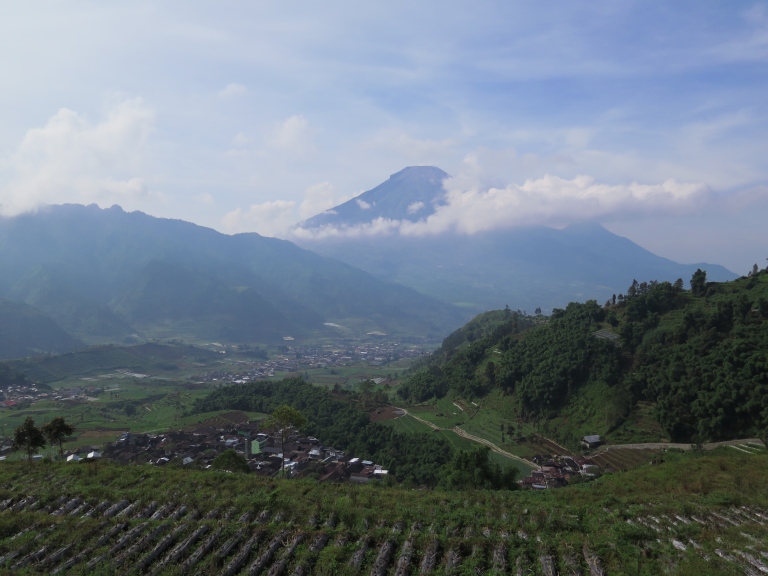 Again, of course, the thing to do in Dieng is to get up and hike to a look-out point before dawn so as to see the sunrise over central Java, and to catch the view before the afternoon mists roll in. And, once again, we were not feeling the early-morning wake-up time so opted for a slightly later start after some tasty local breakfast treats that our host provided. We started by hiking to the top of Sikunir Hill where we had some incredible views in between the clouds. 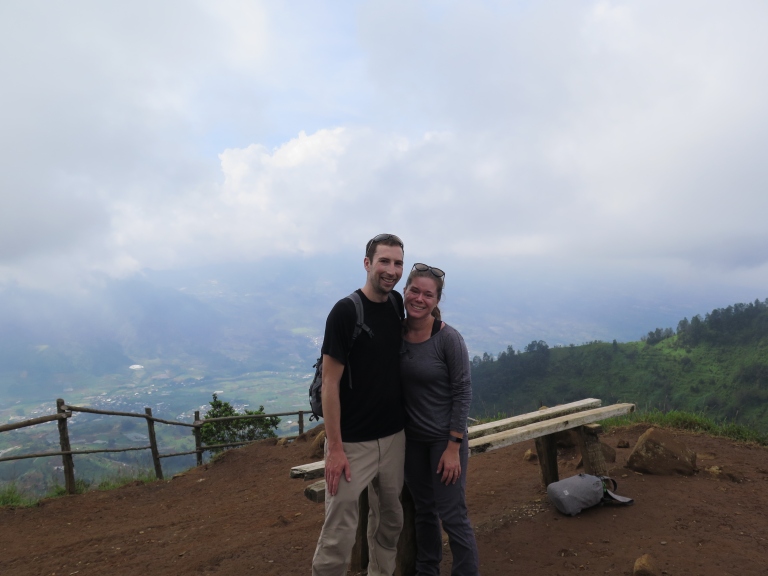 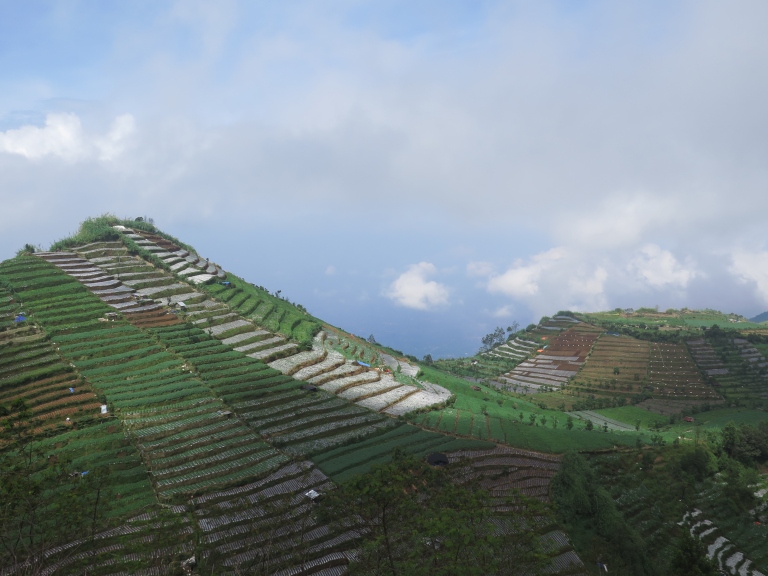 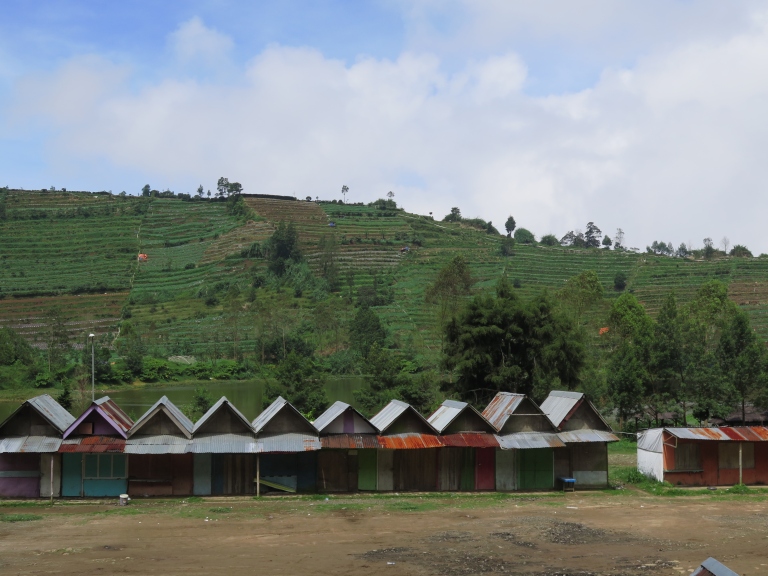 After wandering back down the hill, along some roads, and through a small village we got to Sikidang Crater, an open sulphur crater that bubbles vehemently. It is quite a vast pit of sulphur and it was cool to see tons of smaller vents shooting sulphur-scented steam into the air, but it’s definitely just an excuse to bring tourists in for other money-making schemes and it seemed like not many people were interested in the crater itself. There were so many stalls selling snacks, tourist tchotchkes, and sulphur-related souvenirs (sulphur crystals, sulphur beauty and bath products, etc.) which you had to walk through to get to the crater. And there were tons of dedicated selfie spots with large sculptures like butterflies and flowers, a panda bear, large signs, live owls, and fake topiaries, not to mention other tourist activities like dirt bikes and zip-lining. As we seemed to be the main attraction for domestic tourists at Borobudur, the attractions for domestic tourists at Sikidang were a bit more interesting to us than the crater itself. 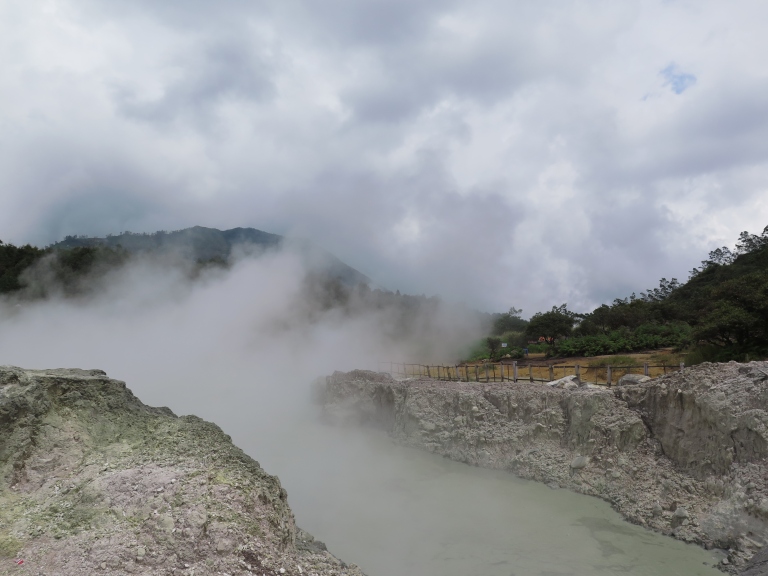 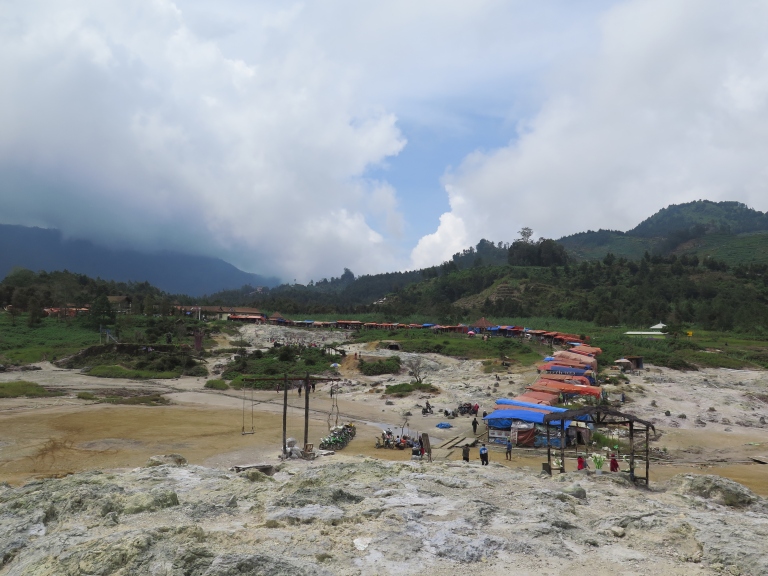 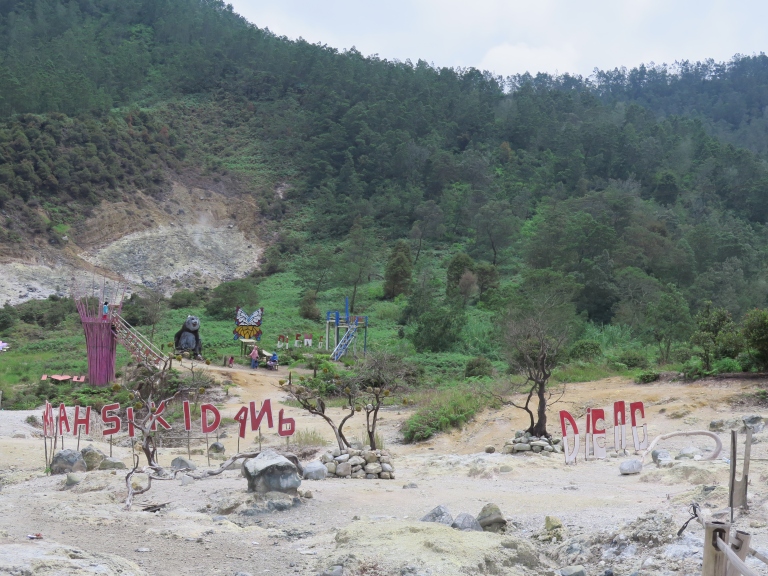 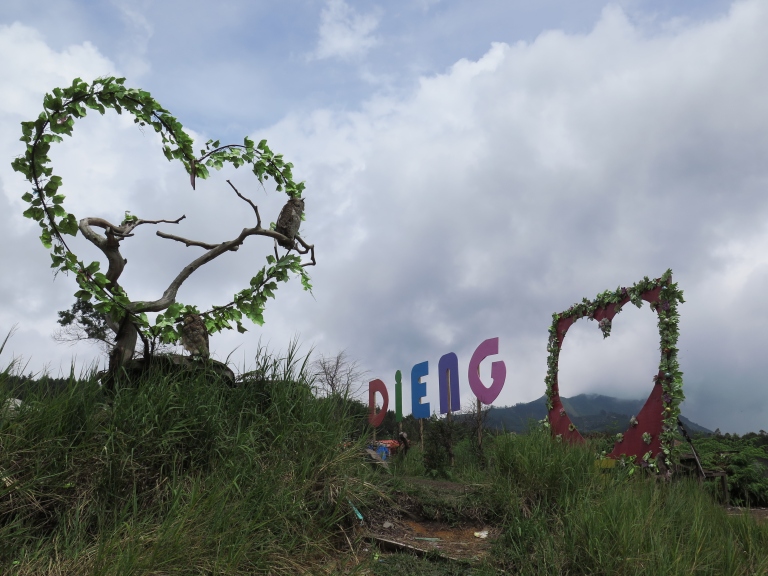 We also made it to Telaga Warna, a lake known as “Colored Lake” because its high sulphur content makes it appear to change colors depending on the light. Allegedly, the lake can be anywhere from green to blue to purple to yellow, but when we were there the lake’s color varied between chartreuse and olive green. It was a nice little hike and a spot for lunch overlooking the lake (we didn’t want to be at the lake since the sulphur smell would be a little off-putting while we tried to eat!), and another nice view of rolling hills and terraced fields. 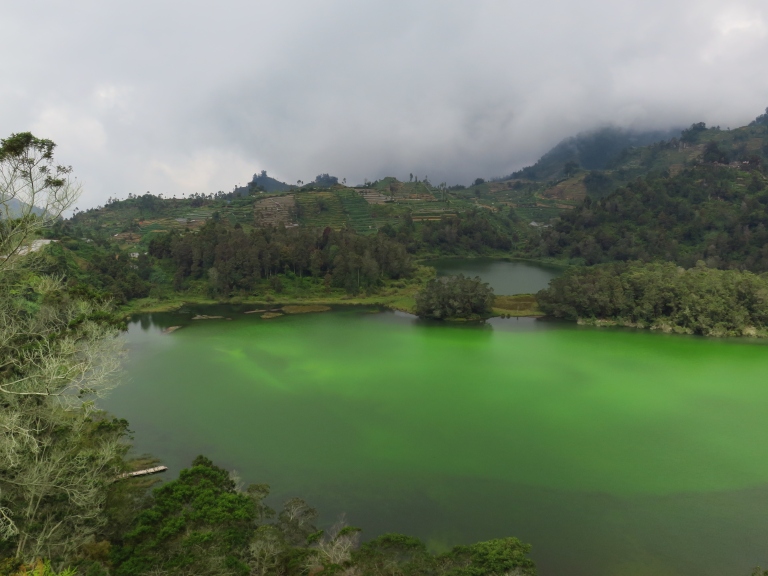 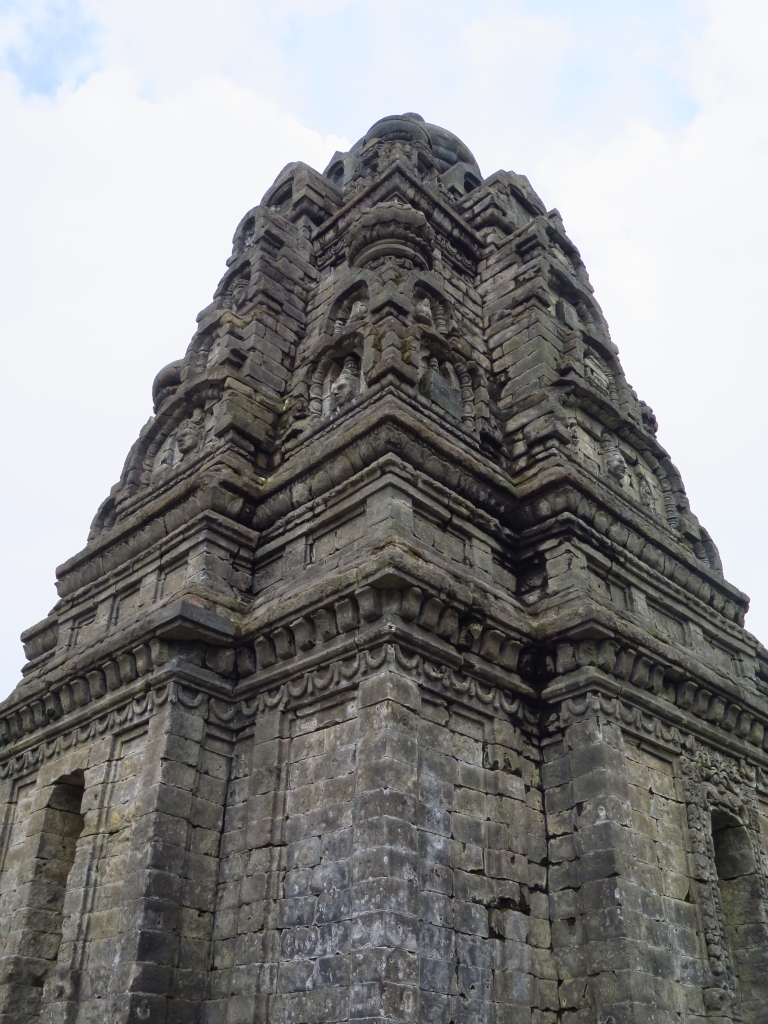 The last stop on our Dieng tour was the Arjuna Temple Complex. Located in the center of the valley, this complex houses several small Hindu temples which date back to the 7th or 8th century. It was a nicely maintained complex and we enjoyed seeing the ancient temples with their intricate carvings, but for some reason there were also entertainers dressed as Hello Kitty (and Boy Hello Kitty…?), the Teletubbies, and pirates. After getting our fill of the temples, we hopped on the bus back to Wonosobo, which was quite an adventure. 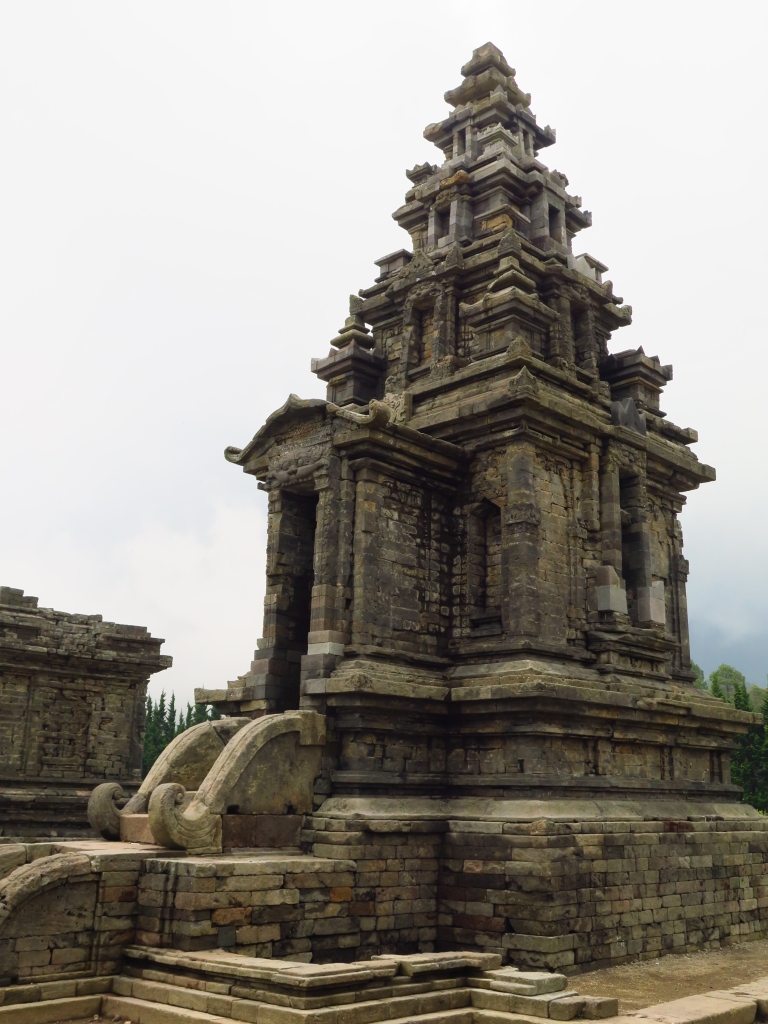 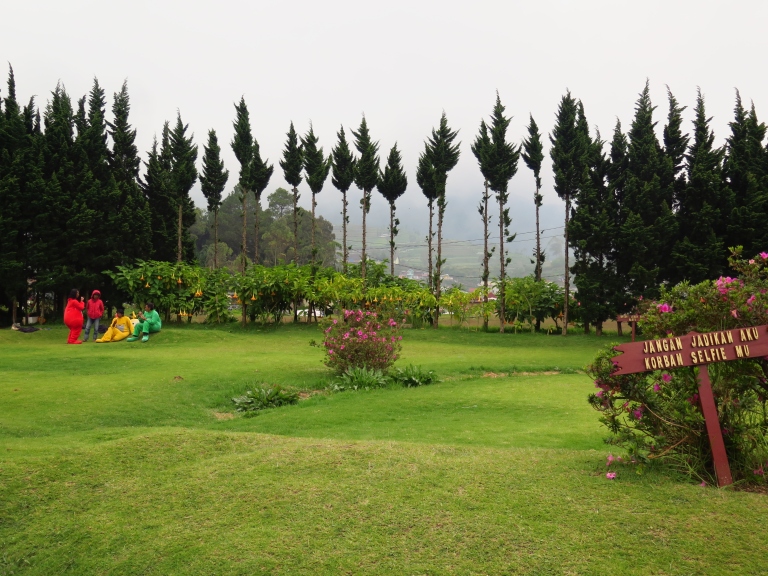 We took a shared car back to Yogyakarta from Wonosobo—got a flat tire in the middle of the jungle and Martin helped change it—and spent our last two days in Indonesia getting stuff done around Yogyakarta, prepping for our flights to Japan and the last leg of our epic journey. 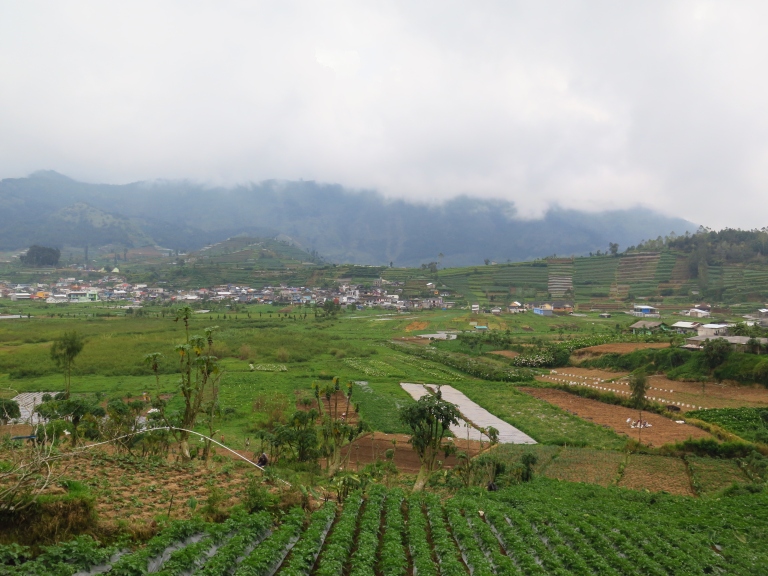 You can see more photos from our time exploring Yogyakarta and beyond here.