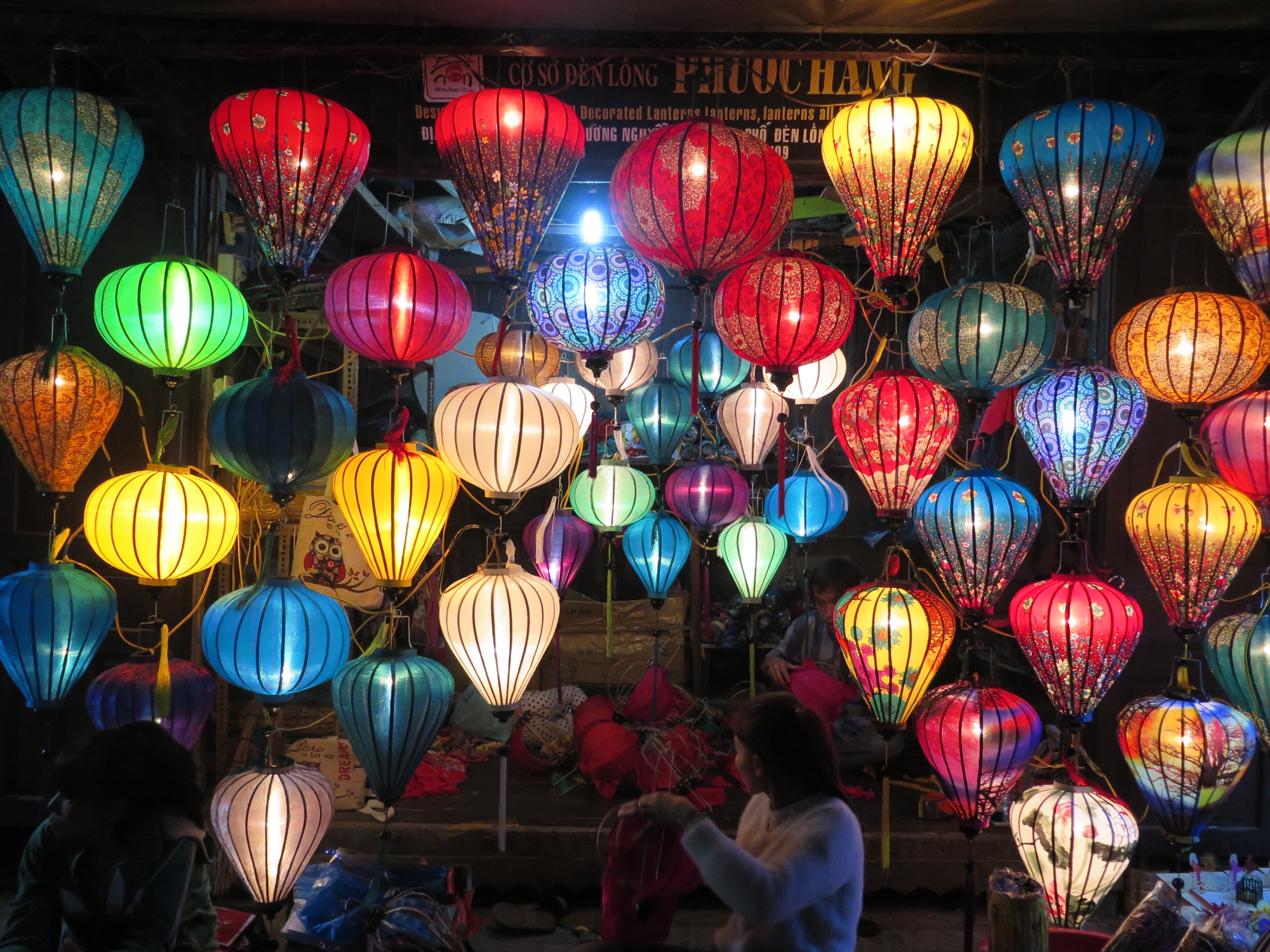 We slowed our pace back down once we got to Hoi An, having heard great things about the city and not wanting to burn ourselves out too early on in our adventures. We spent a week just outside the city in a community called Tra Que and then spent three nights in a hotel right near the old town of Hoi An. It may have been a bit longer than we needed there, but it was really nice to have some time to relax (I got two massages while we were there), think, and plan.

Hoi An is a cute little city sandwiched between the coast and the Thu Bon River in central Vietnam. It is known for it’s Ancient Town, an old trading port which has a mix of French colonial buildings, Chinese pagodas, and old Japanese homes. The Ancient Town itself is a UNESCO world heritage site, and you technically need to purchase a ticket to even walk around but in practice they only check them at the historical sites and museums. 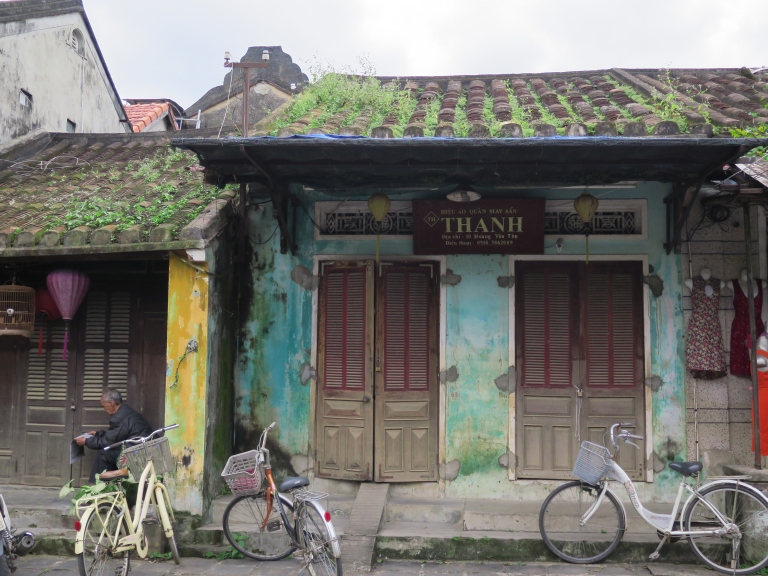 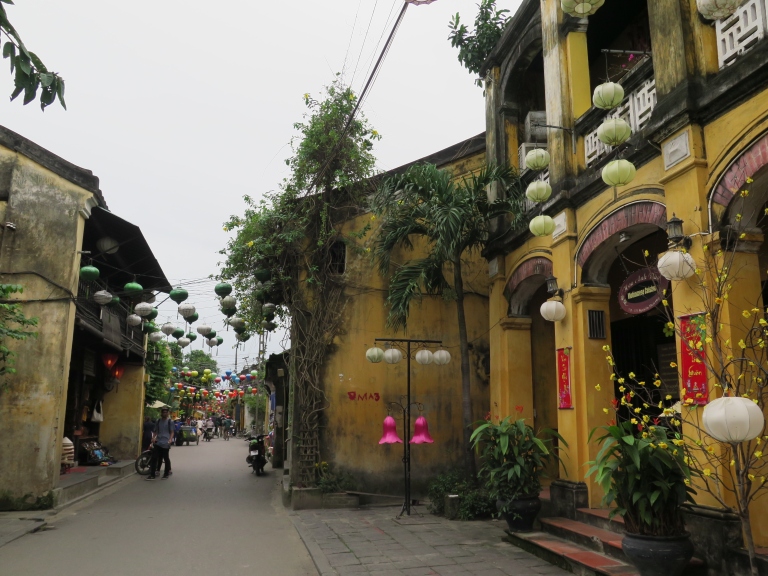 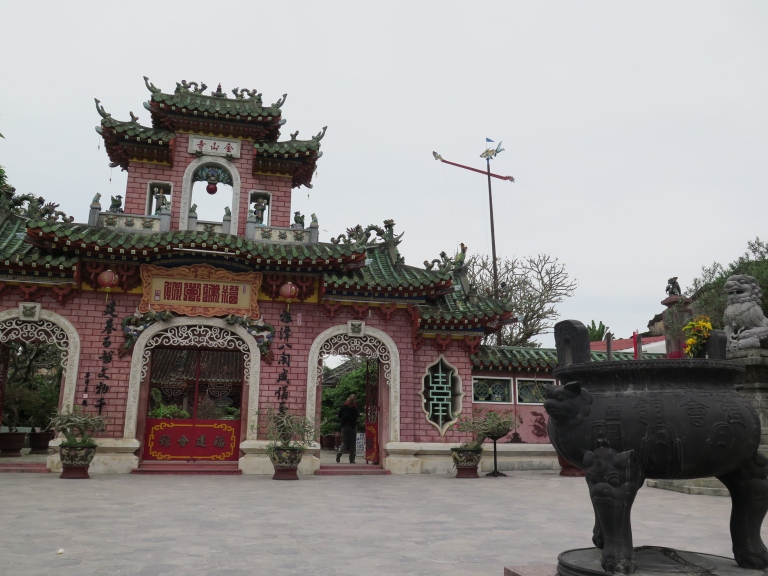 Thinking back on our time in Hoi An, it’s hard to remember what we did there for ten days! It was definitely a slower pace than we’d been keeping thus far. One thing that ended up taking up more of our time than anticipated was getting clothes made. Yup! We spent one afternoon going to a few different tailors, checking out fabrics and getting quotes. We ended up going with one of the higher-end places (which was still a complete bargain, compared even to buying similar items off-the-rack at home) and went back every afternoon for several days to do fittings.

Martin had a suit and two shirts made, and I got a little black dress and a nice wool coat. (We shipped everything home; I did not want to carry a coat around with me!) It was quite a fun experience to have something tailor made; it was also overwhelming as you have so many fabrics to choose from and you can customize everything. They making it tempting to buy more, too, since once they have your measurements they start offering discounts for the more you buy. It was a fun process and hopefully everything still fits when we get home! 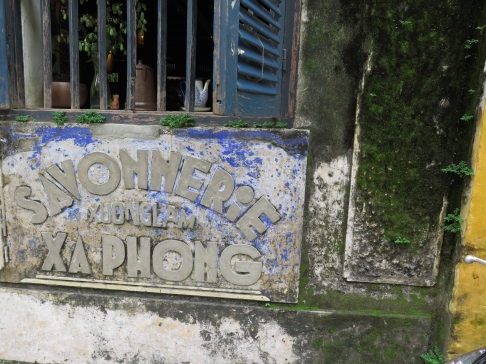 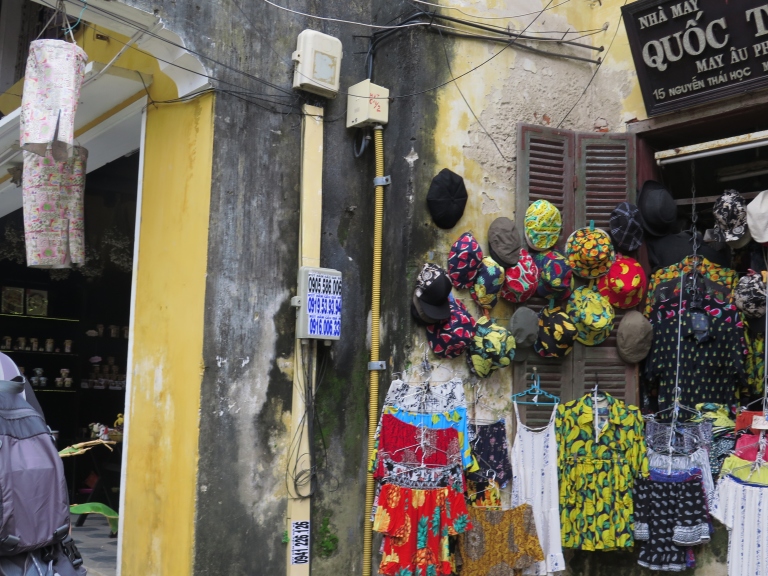 We spent a fair amount of time just wandering the streets of the old town, absorbing the sights and sounds, sitting at cafes and people-watching. One of my favorite people-watching sights was tourist groups that walk down the streets all in their new matching outfits that they just purchased. One evening we were just sitting by the river listening to some live covers of American 90s music, and then I realized that it was the same group we had heard at the Farmstay in Phong Nha.

Hoi An is known for the lanterns that are made there and that adorn almost every alleyway and storefront in the old town. On the night of the full moon, they turn off all of the electric lights and the riverfront is lit only by the lanterns and candles floating on the water. But in reality, you can see almost the same thing every night for the sake of the tourists, just with all of the street lights still on. 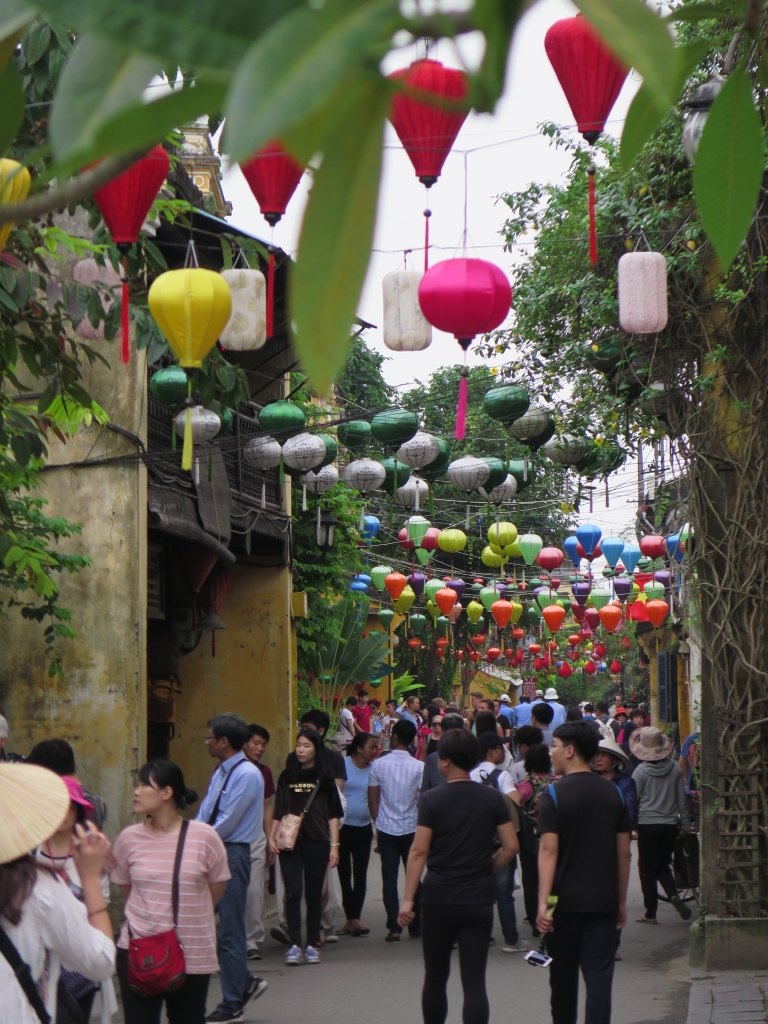 The sight of candles floating on the river is pretty magical, but it also raises the question of where the remains of all of the candles and paper flowers goes every night. We’ve become hyper-aware of the amount of trash that doesn’t get properly disposed of in this part of the world (and at home…) and so couldn’t bring ourselves to pay for the candle and contribute to the litter, even though it is a lovely tradition. 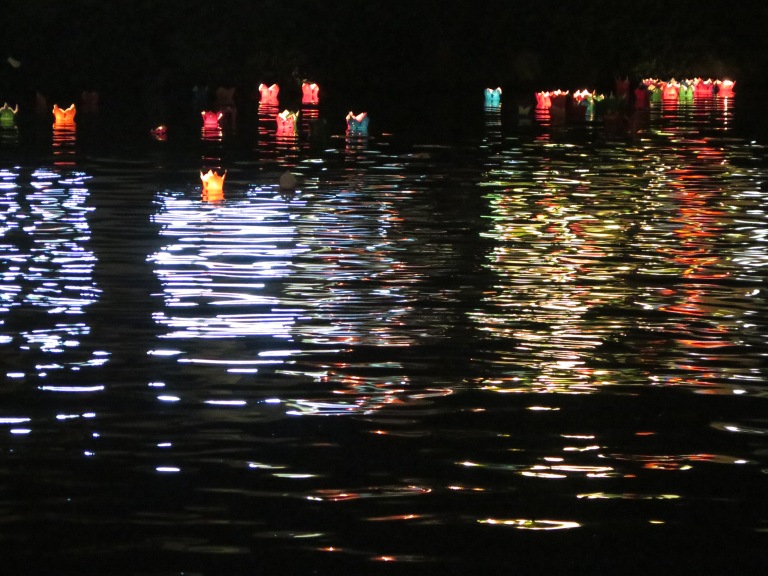 The lanterns were especially spectacular in the night market, where sellers had huge lit-up displays adorning their stalls. We had fun exploring the night market and went back a couple times to try some different treats (like banana pancakes, coconut cakes, and mango cakes which are like peanut-filled mochi and have nothing to do with mango…). Mostly the stalls in the night market just sell different variations on the same touristy tchotchkes that we see everywhere, but it was fun to wander through and see all of the vibrant colors and all the different food stalls.

We did another cooking class while we were in Hoi An which was really fun. It included another market tour where we learned a few new things and got to taste some little prepared treats, but I think our guide was disappointed that we had already done a market tour in Hanoi and knew a lot of the answers when she held up produce and asked us, “do you know what this is?” The cooking class was actually a boat ride out of Hoi An, on an island in the river. The location was cool because it was in a house traditional to the area, with the owner’s grandma there to show us how to use the traditional rice-milling tools, and we got to see a traditional village and hear stories of the yearly flooding. 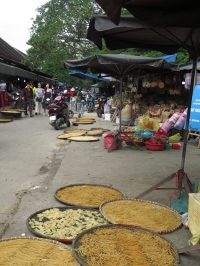 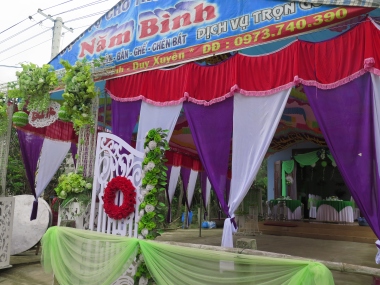 We learned how to make the large, fresh rice noodles by pouring a little bit of rice milk (dry rice ground with water) on a piece of silk over a pot and then briefly steaming it. We used them in fresh spring rolls with lemongrass pork which were super tasty. It was an interesting class because we learned more about the history and the ways things were done traditionally, and how “things are getting better now” with cheaper/easier/faster ways to do almost everything.

The afternoon after the cooking class was the final game of the Asian men’s under-23 soccer championship, in which Vietnam was playing and the town was very excited! Everyone had their Vietnamese flag gear on, including tourists, and we heard the “Ole, ole ole ole” chant countless times. The celebrations started in the morning and when we did our market tour people were already getting into the spirit. The whole town (and, I think, probably most of the country) had pretty much shut down for the day in anticipation of the game; it was like the last day of school when you know you still have things to get done but can’t focus on them because you are so excited. 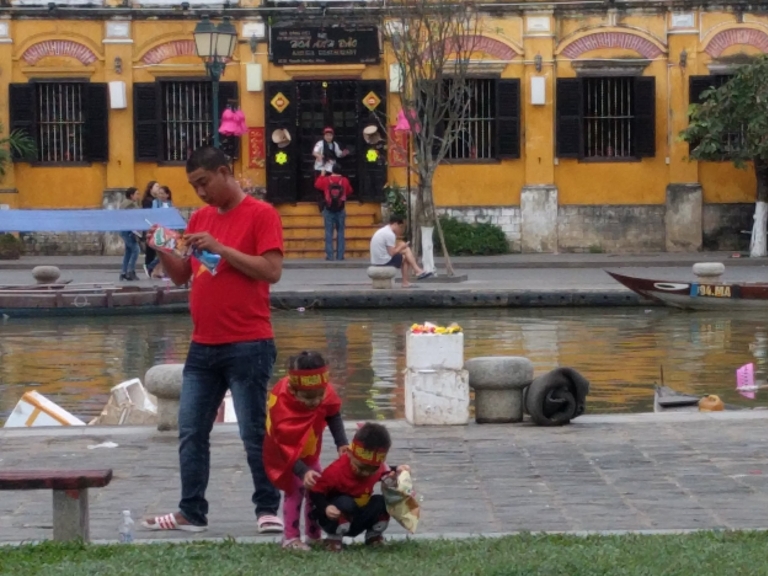 We found a restaurant that had set up a TV and was streaming the game, and caught most of it while having some beers and pretending we knew anything about soccer; their feed was a little slower than that of the surrounding restaurants so we could hear everyone else reacting to the game a few seconds before we knew what had happened. People on motorbikes and rickshaws kept riding around with Vietnamese flags and gongs; some people had devised makeshift noisemakers from metal serving trays and chopsticks, which splintered after the first goal with the force of some enthusiastic drumming. The game was against Uzbekistan and it was snowing on the field where they were playing; Uzbekistan had to change out of their white jerseys after the first half because they blended in to the snow-covered field, and it seemed pretty unfair as I’m sure most of the Vietnamese team had never seen snow before. It was quite a fun way to pass the afternoon but unfortunately Vietnam lost the game. There were still tons of motorbikes parading around town all evening—good news was that there were fewer vehicles to dodge on the other streets, bad news was that it was harder to catch a taxi back to our hotel. 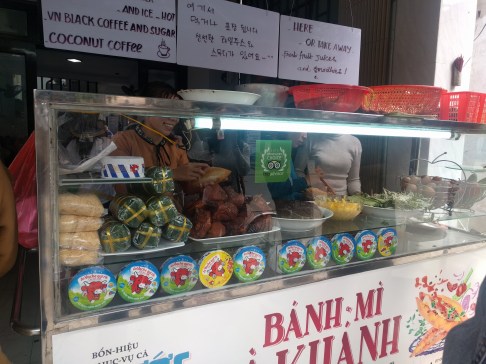 We of course ate our fair share of local fare. A stand-out favorite were the banh mis from Madame Khan’s, Banh Mi Queen. (Anthony Bourdain went to a different place when he visited Hoi An, but everyone swears that Madame Khan’s are the best in town. We went back three times!) We also tried the local specialty cau lau which is noodles served in a light broth with pork and fresh herbs. The noodles are what make it so special as can only be made with water from a specific well in Hoi An, which apparently gives them their particular color, texture, and taste; it was pretty good, but I couldn’t help but wonder what was in the well… 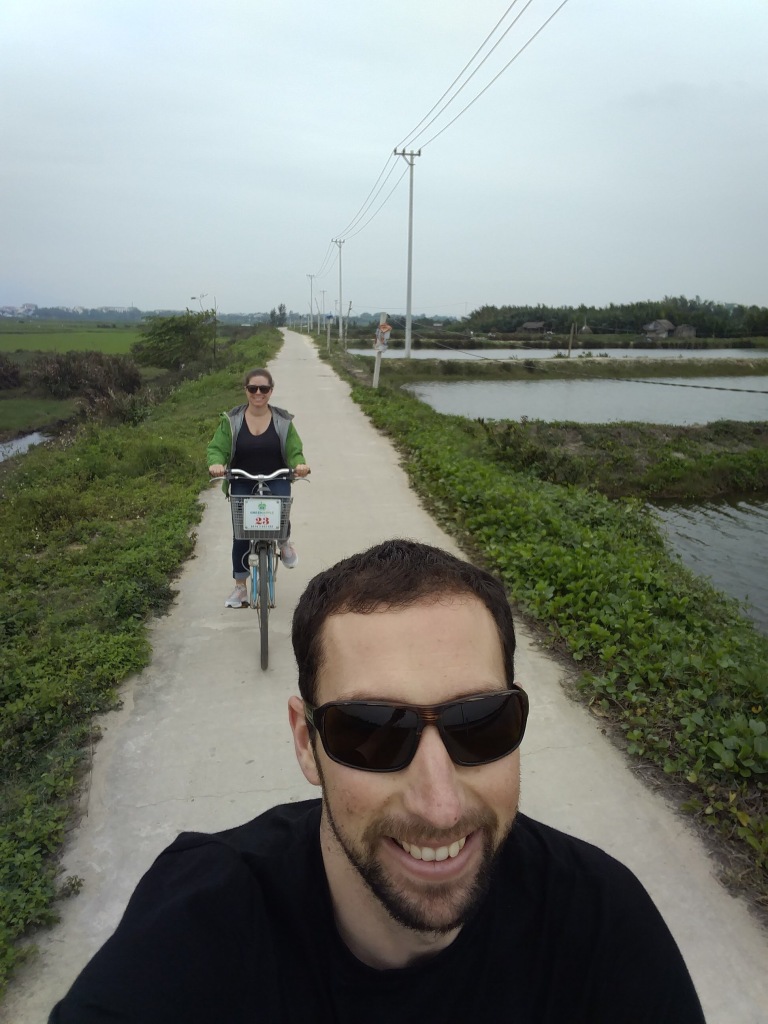 We spent a couple of days exploring the area by bike: One day we went out to the beach, and another day we rode out through the rice paddies and little farms to see some of the surrounding towns. The area is generally quite flat and it was a fun way to explore, riding around on our little cruisers. 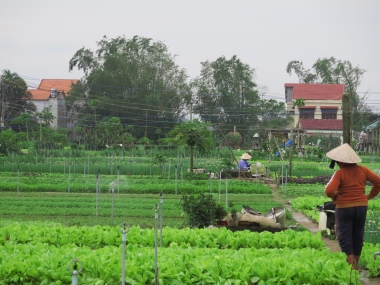 We indulged a bit as tourists during our time in Hoi An, as it was a totally enjoyable town to hang out and slow down for a while.

Check out more photos from Hoi An here, and stayed tuned for our adventures in Da Lat—our last stop in Vietnam!

One thought on “Hoi An”