Sorry for jumping around a bit! Going back in time here: Before we embarked on our Southwest roadtrip, we finished up the Europe part of our grand tour by eating as much food as we could in Alba, Italy.

We left my parents in Bologna to enjoy a few days there by themselves and headed to a small city called Alba in the Piedmont wine region where we finished off the first leg of our adventure.

Alba is a cute and bustling city smack-dab in the middle of one of Italy’s wine regions—the area is home to the Nebiolo, Barbaresco, Barolo, and Moscato d’Asti wines. Alba is also a foodie heaven, home of the Slow Food Movement and known for its white truffles. (It’s also where Michele Ferrero invented Nutella and Ferrero Rocher (and did you know that Tic-Tacs are also made by Ferrero???). Unfortunately you can’t visit the Nutella factory, but rumor has it if you drive by it the air smells like chocolate.) So needless to say, we were pretty excited to be spending a bit of time in the area.

We spent days driving around the little surrounding hill towns of La Morra, Barbaresco, and Barolo in our rented Fiat 500. The towns were all quite charming but similar, and one of the main draws was just to drive in the hills with views of the vineyards in their autumnal glory. 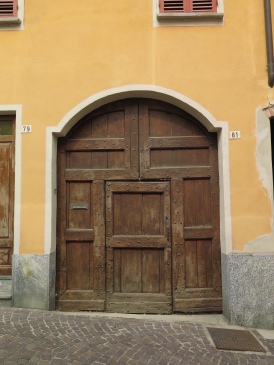 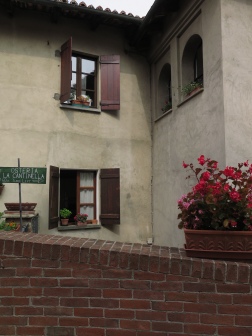 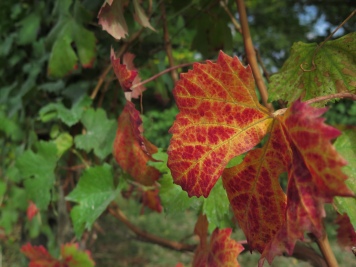 And in true Martin-and-Theo fashion, most of our time in Alba revolved around food and wine.

We got out and did some wine tasting, but it gets quite expensive and most places require you to participate in an “experience” in order to taste. So we did most of our wine tasting out of the grocery stores and wine shops, sometimes relying on blind luck, sometimes doing research, and sometimes just buying whatever seemed the most popular on the shelves. (Pro tip: restaurants in the area that are designated as “slow food” restaurants are required to list their wines at the retail price, without any restaurant mark-up!) 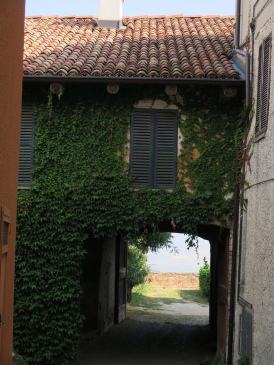 Each nearby town hosts a market one day per week, so we would drive to the different towns to do some exploring and to pick up produce and treats for dinner. I got to use my (extremely limited) Italian skills to do some ordering and purchasing! We had fun blindly picking out cheeses from the incredible options and when we selected a buffalo milk robiola, the cheese monger commended us on our selection. I don’t think we ever got to try the rare and more expensive white truffles of Alba, but we did get to try plenty of black truffles including truffle ravioli which we purchased fresh from a market.

We made a lot of meals at our apartment which was especially fun since I recognized a lot of foods in the markets and groceries that are harder (and more expensive) to get at home. And I was happy because Martin humored me by letting me get all of my favorite Italian treats: cantucci and vin santo, gianduja, torrone, among many others.

Don’t worry: we also found time for some meals in restaurants! One standout experience was at a little, crowded trattoria in Alba that didn’t have a menu. We were seated and asked if we would like to start with antipasti (yes, duh), but were not told what it would be; four rounds of antipasti later (including fried squash blossoms (my favorite), fresh burrata (also my favorite!), and raw ground veal (an Albese specialty and not so much a favorite…)), we were pretty much completely full but still opted for a pasta course. Again, there was no menu so when they asked us if we wanted a primi and we said yes, they just told us the three options for the day: we both chose ravioli (made the local way like a little handbag, instead of flat rectangles) with butter and sage. The best part was when the owner just put a random half-order of pasta bolognese in front of Martin because he was worried Martin wasn’t eating enough! We were too full after that to go for the meat course, but definitely had enough room to share some tiramisu for dessert. When we were ready to pay the bill, the owner asked us which courses we had had, typed apparently random numbers into a calculator, and then subtracted some arbitrary amount from the total. I have no idea what we should have paid for the meal, but I do know that in our jaded-by-San-Francisco world, it was a steal!

Another excellent restaurant experience was an agriturismo a little ways out of Alba where we went for Sunday lunch. It was the sort of place filled almost entirely with locals and that serves good but not fancy traditional fare for a very reasonable price. Similar to the meals I remember eating at my Nonna’s house, the food just kept coming and coming and coming, and we ate ourselves silly: The antipasti (again with the raw veal!), followed by fried things, and then two primi (ravioli and red wine risotto), secondi of meat and stewed peas and potatoes, and then a plate of desserts and coffee. And of course, a bottle of their house wine to wash it all down. It was a great experience and we left feeling like we had been guests in someone’s home and that we had seen a little slice of real Albese life. 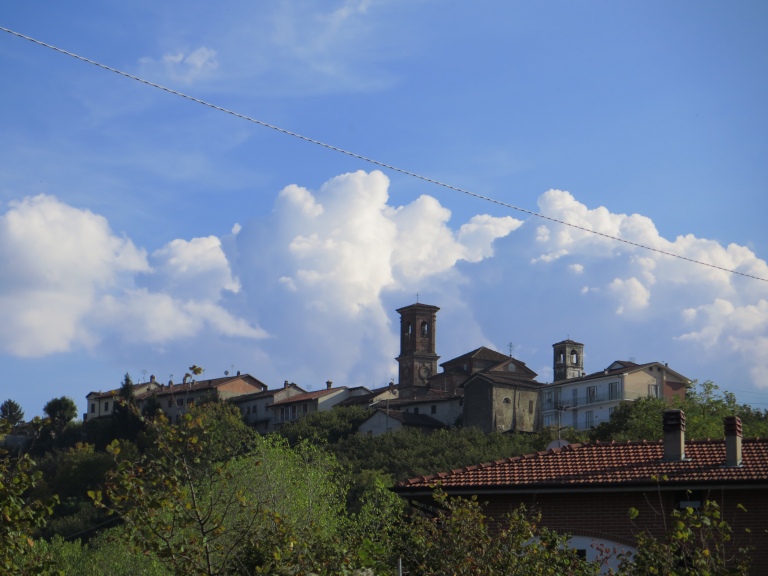 Of course, one of our favorite activities was just people watching, especially during the afternoon passagiatta when everyone comes out into the streets to stretch their legs and socialize before dinner, perhaps to grab an apperitivo and catch up with friends. We sampled the Aperol Spritzes of several local establishments with outside seating on the piazza.

The last days of our time in Alba were also the lead-up to the Truffle Festival which takes place there in October. So as we were winding down our time and reflecting on our travel experiences thus far, the town was ramping up for a great influx of people and food. We had fun seeing the town transform and explode with food stalls, carnival treats and balloons, vendors selling nuts and torroni.

We had a hard time deciding how to end the first five months of our world tour. I think in the end Alba was the right decision for us. Italy is a place that is both familiar (food and culture) and new (Alba and Piedmont) for us, so we did not feel bombarded by new sights and experiences every day; we had time and energy to absorb the culture and our surroundings, but also did not feel that we needed to be out exploring every minute of everyday. The slower pace of life afforded us time to reflect on our experiences thus far, and the familiarity of being somewhere that was not entirely new to us gently prepared us to return home home.

You can check out more photos from our time in Alba here.

We said “goodbye” to Alba on October 2 and crammed back into our Fiat 500 for one last roadtrip back to Bologna for our flight home. On our way we stopped for a few hours in Modena (home of balsamic vinegar, and part of the second season of Master of None!) as we had heard good things about it (and didn’t want to just blitz to Bologna to hang out in our hotel room). Modena was a very sweet little city, what we briefly saw of it, and I think I will definitely want to return someday to check it out some more. We wandered around the covered market and then grabbed panini from a little stall next door. As we were waiting for our sandwiches to be ready, an American couple came up and asked us to move over a little so that they could take a picture of something on the wall behind us; we hadn’t noticed before, but there was a framed picture of Dev and Arnold (from Master of None) eating at the same place!

From Modena we headed back to Bologna and checked into the hotel for our last night in Italy. After a stroll through the streets and a Spritz while the setting sun turned the sky pink over the city, we managed to snag an early table at a classic restaurant and enjoyed our last tortellini in brodo of the trip. The next morning we flew from Bologna to Frankfurt (and ran into an old family friend in the Bologna airport on her way home!), and finally from Frankfurt to San Francisco.

Our European adventure came to a close as we flew over Point Reyes at sunset on our second wedding anniversary. 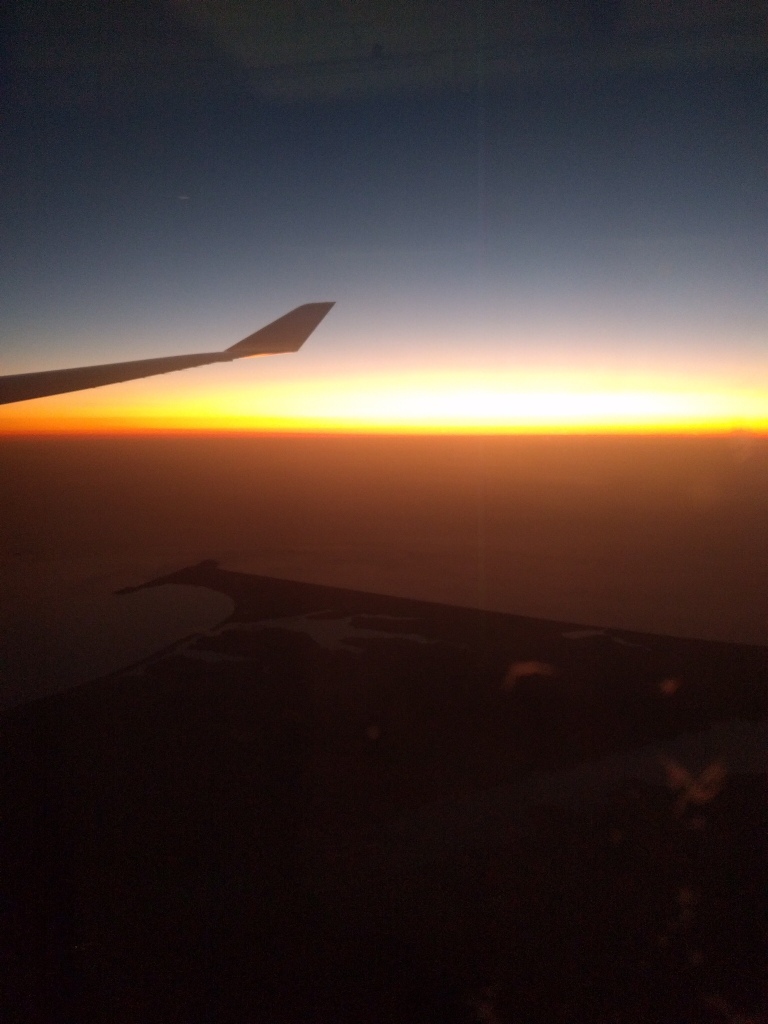