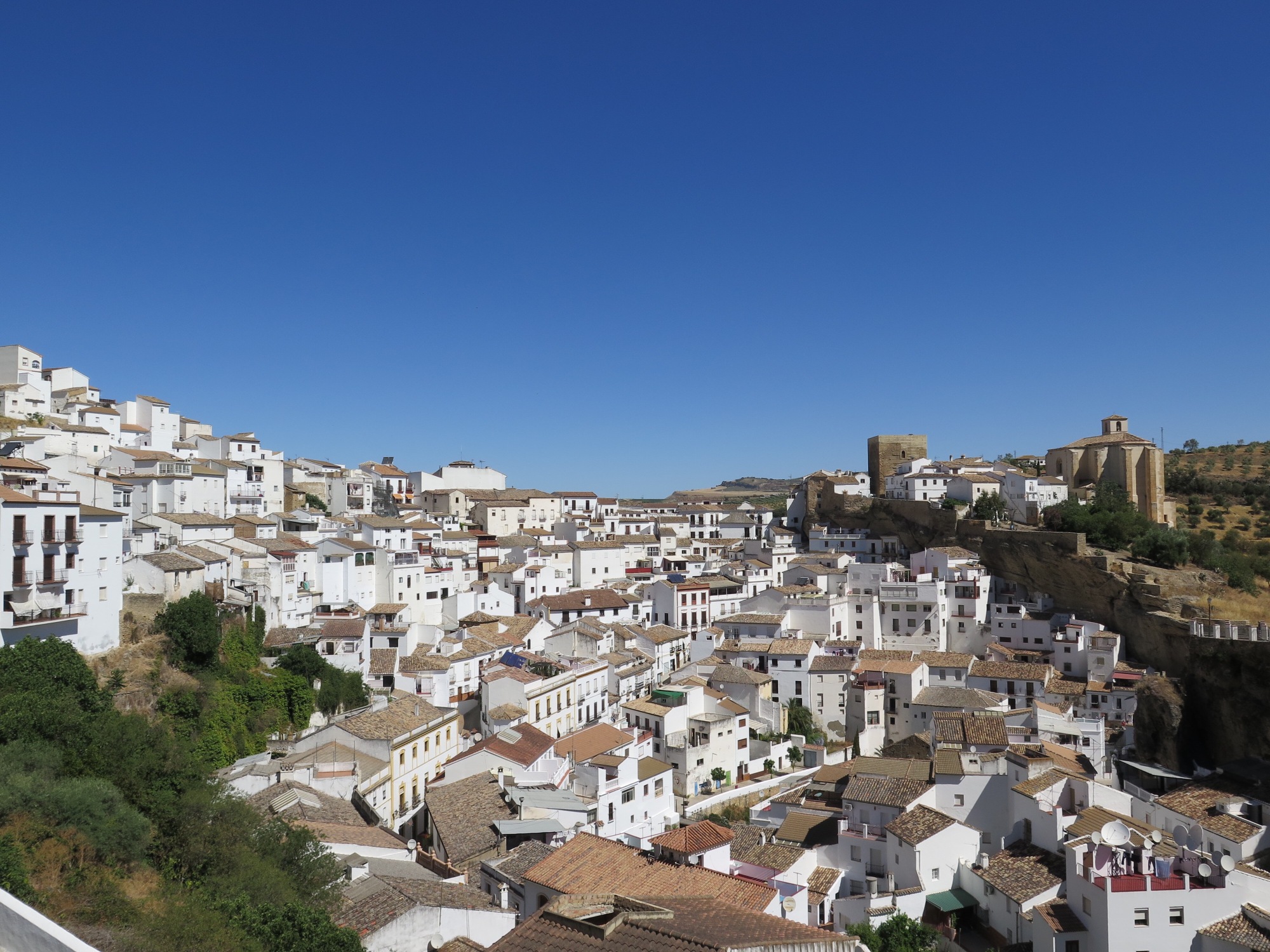 We arrived in Sevilla, Spain after our flight from Marrakech. Luckily, that last flight with RyanAir was not nearly as bad as the one from Marseille to Fès!

From Sevilla, we rented a car and drove through rolling hills to get to Ronda in the province of Málaga in Andalucía. The climate (hot and dry) and the terrain (rolling hills with olive trees, fig trees, and oleander) were strikingly similar to those that we had just left in Morocco. And, of course, that is not where the similarities stop: Andalucía was under Moorish rule for many centuries and you can see the influence in the architecture and culture of the area; in fact, the architectural style that we saw in a lot of Morocco originated in Anadalucía. 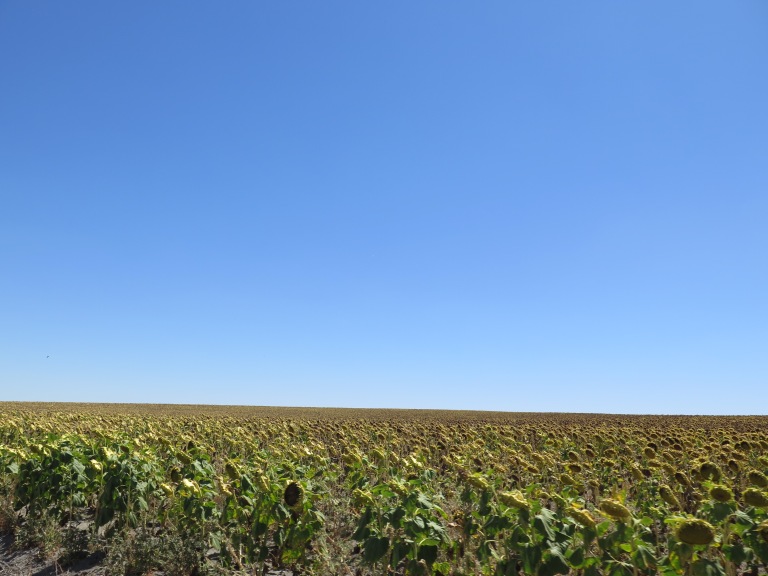 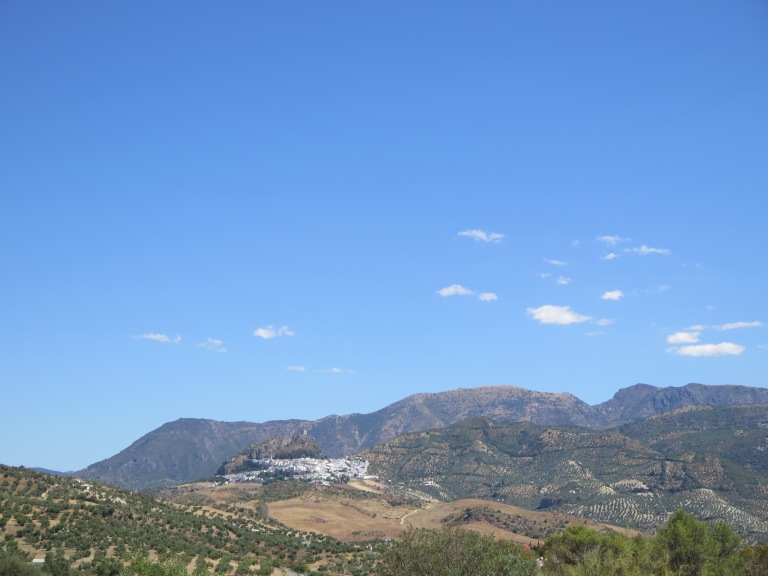 We knew that we wanted to spend some time in Spain and clearly it made sense to go straight there from Morocco, but we couldn’t decide where we wanted to go. I had previously been to Córdoba and Barcelona but Martin had never been to Spain before. There are so many cool places that we want to get to in Spain that we couldn’t settle on just a few and likely would have ended up spending only a day in each place. Luckily, our friends Katie and Kyle had just spent their honeymoon in Ronda and when we heard their rave review we booked our visit without a second thought. We even stayed in the same Airbnb that they had stayed in! So, thank you Katie and Kyle!! 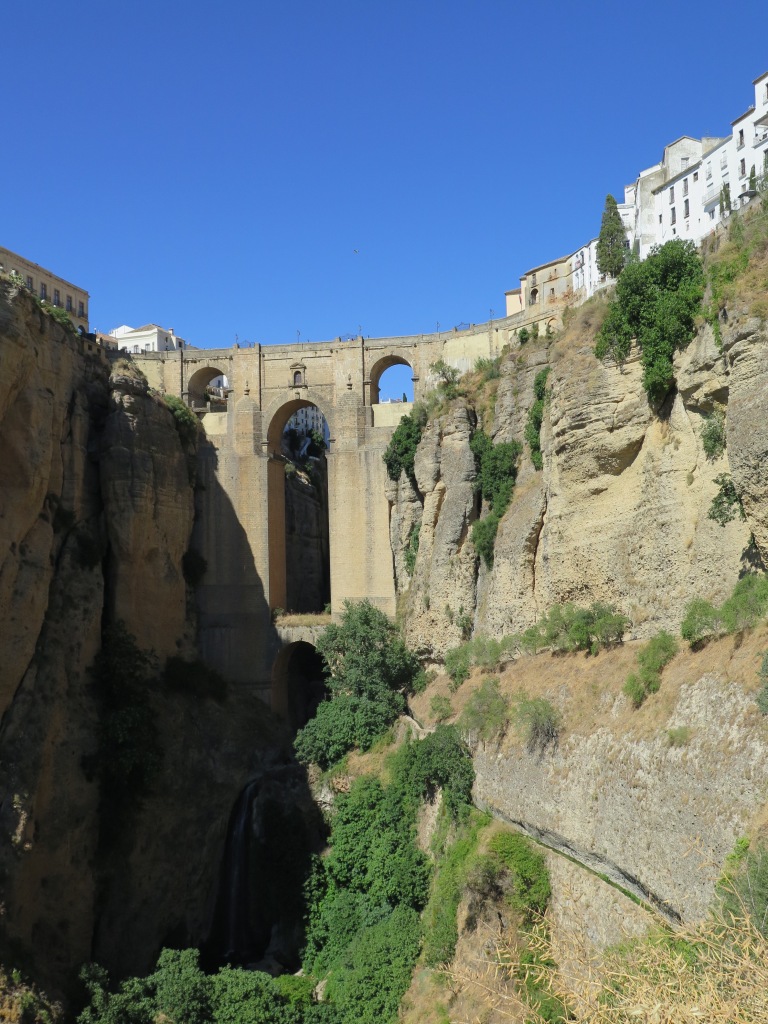 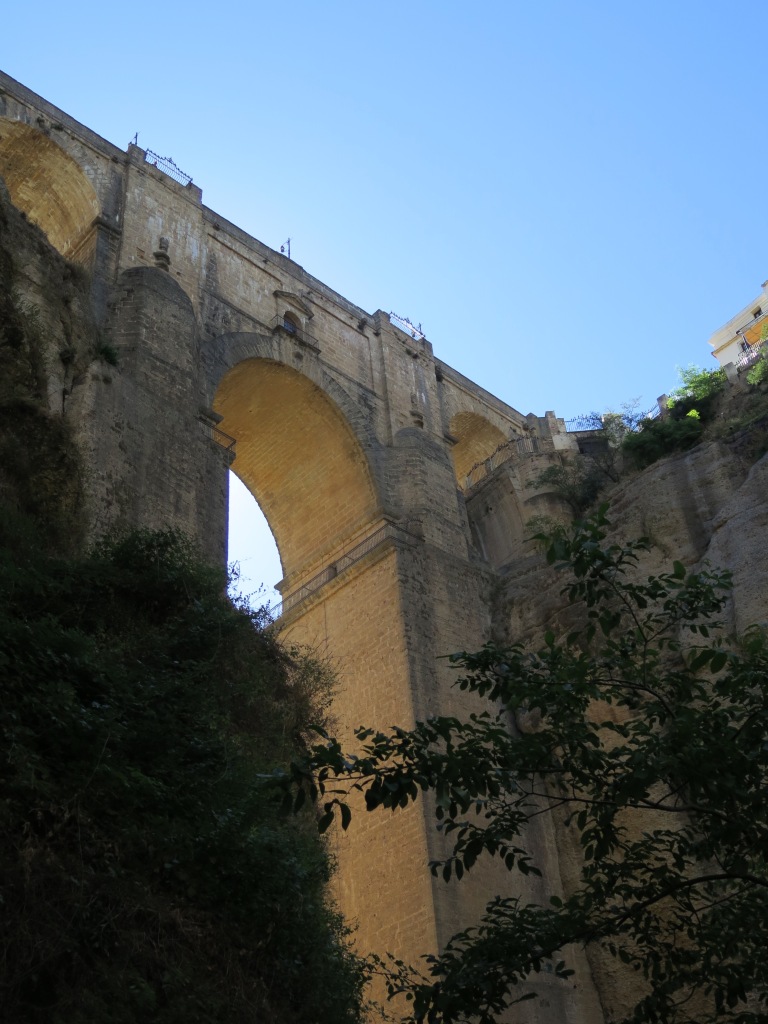 I think that may be one of the themes of this trip: That we are really only scratching the surface and we will need to visit some of these places again, for longer, to better experience them. It’s been like going to a buffet, taking a little nibble of lots of dishes, seeing which dishes we like the most, and then planning to come back when we are hungry again to get full plates of our favorite. We’ve also heard from people that we’ve met along the way about other amazing places that we need to visit. We’ve heard our fair share of “Why aren’t you visiting [their hometown]??” “Why are you only here for [small number of days / weeks]??? That’s not nearly enough time!” “You have to go to [a hard to reach / expensive place]. You won’t really experience [country] if you don’t.” “Go to the [food / cultural / music / etc.] festival! It doesn’t work with your dates? Then, change your dates!!” Our response has usually been, “We’ll just have to come back! :)” 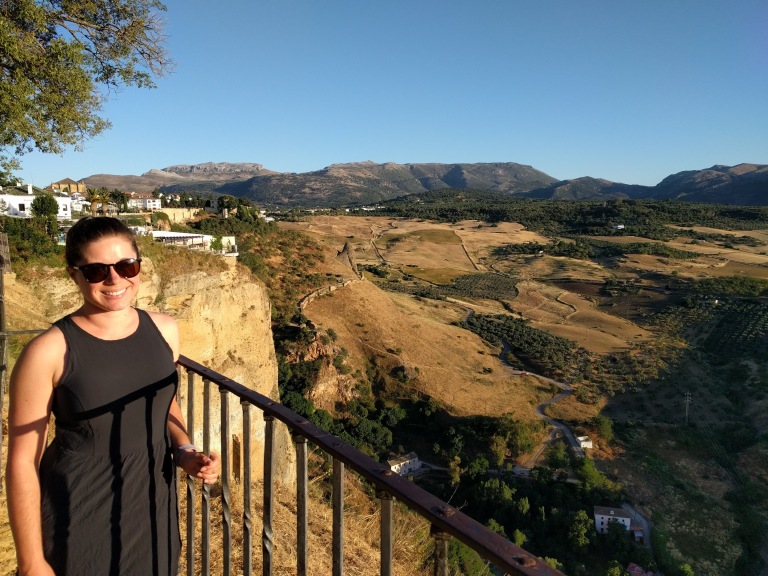 We loved Ronda: great food, great wine, not expensive, touristy but not too much, walkable, friendly people, amazing views, interesting history, cool architecture, old bridges, rivers, deep gorges, proximity to hiking, great food… Our little apartment was a bit of a walk away from the tourist center and we were in a neighborhood of mostly locals, which I think allowed us to get a better feel for the local life and culture. 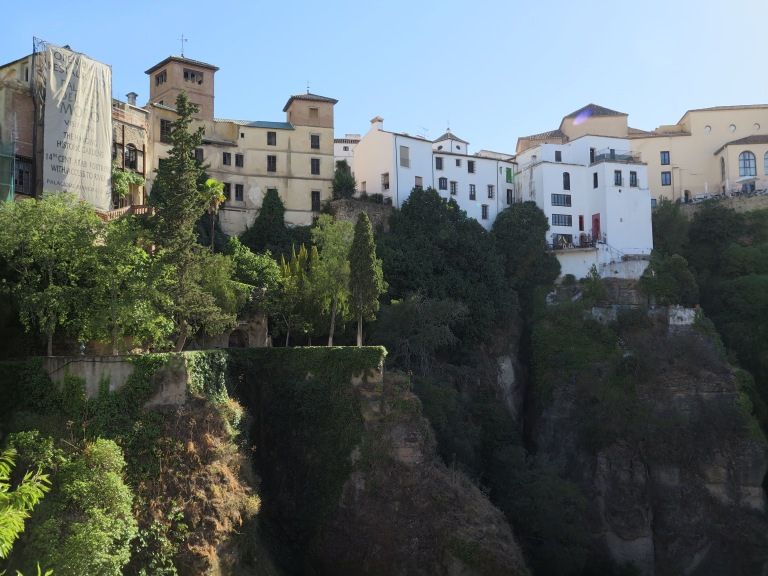 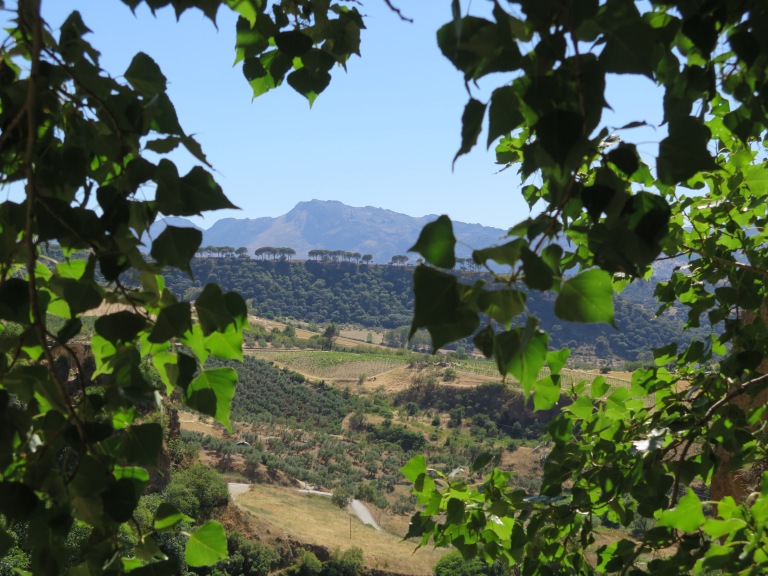 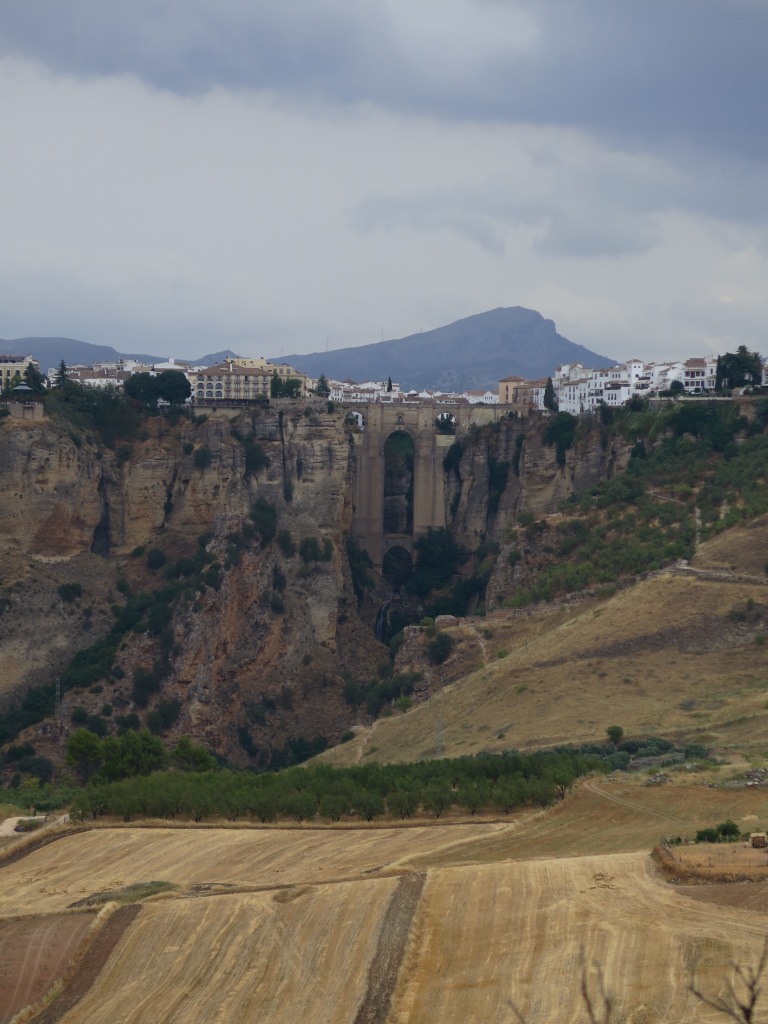 Leading up to our time in Spain, Martin had been diligently completing his Spanish lessons on DuoLingo and actually had some opportunities to use his skills! We had an adventure trying to get my phone fixed (because I had dropped it in a toilet in Essaouira… 🤦‍♀️) and most of the people working in the phone repairs shops didn’t speak much English, but Martin was able to explain the issue. And he also went and found a barber for a haircut one day (for some reason he didn’t like the cuts his other barber (me) had been giving him…) and didn’t even come back with some crazy trendy hair-do!

Here are some highlights from our time in Ronda:

Hiking: We did a fair amount of walking in and around the city, walking down the hill to get a view back at the amazing bridge, but we also got out of town and drove to a couple of good hikes.

One day we hiked up to Pico Torrecilla in the Sierra de las Nieves. At 1,919 meters tall, it is one of the highest in the region. Also, due to some road closures it ended up being a 20km round trip. We had the trail completely to ourselves the entire day (except for some goats) which was a really cool experience, to be out in the wild with no other person in sight. It was a completely clear day when we got to the peak so we got to look out over Málaga, and could even see the Strait of Gibraltar; it wasn’t quite clear enough to see all the way to Morocco. The natural park is also home to a rare species of pine tree that only grows in certain places in Andalucía: the pinsapo pine. And we saw some! Supposedly, the pinsapo has been around since before the Ice Age, so that’s pretty cool. 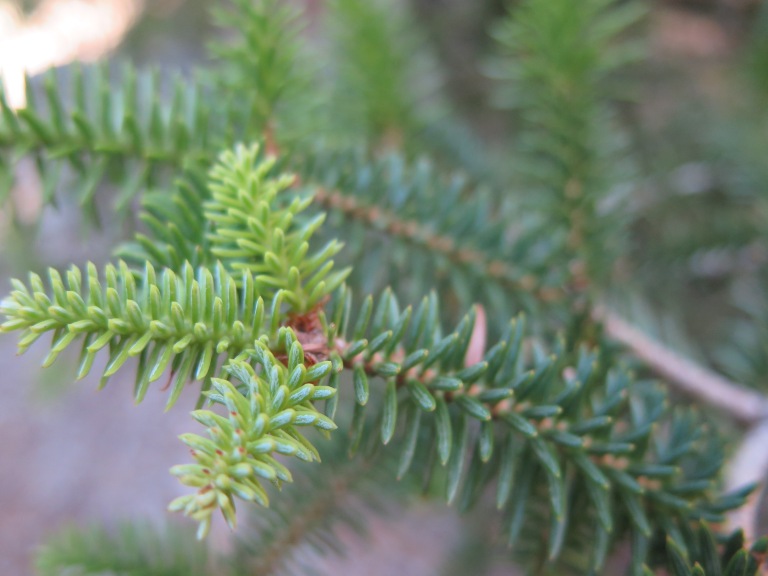 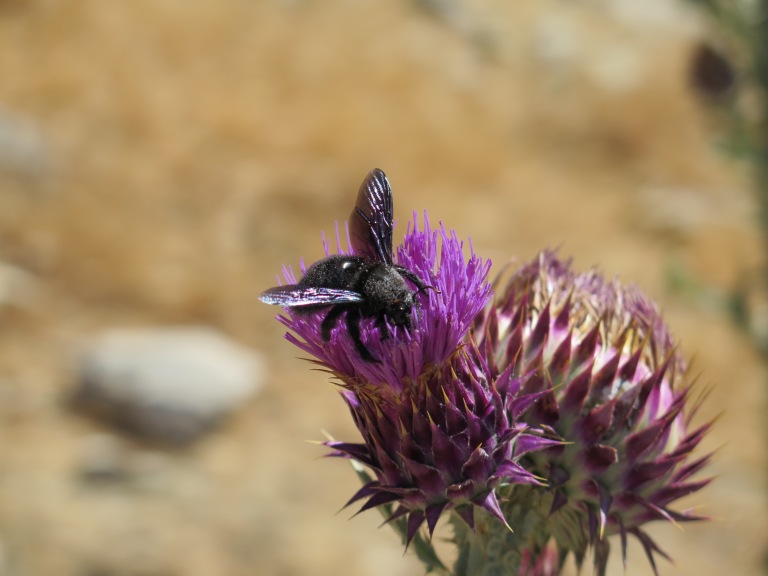 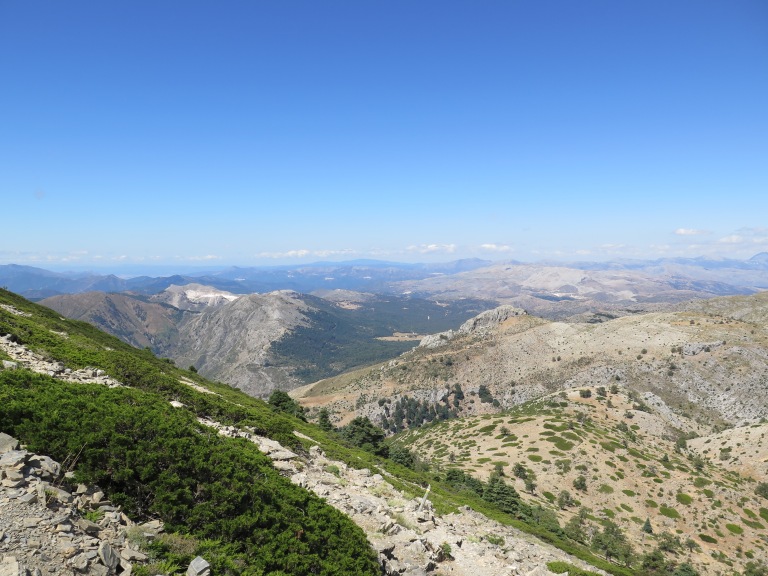 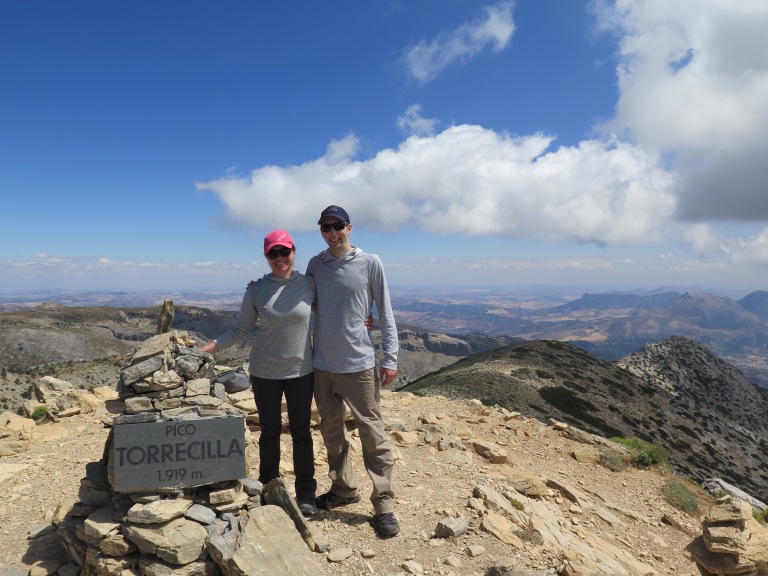 Another day we checked out the Caminito del Rey in the Gaitanes Gorge. Originally built in 1905, it is a walkway pinned to the inside walls of the gorge and served as a path for workers to go between the hydro-plants at either ends of the gorge. It was closed for a while, then completely rebuilt and just re-opened to the public a few years ago. It is definitely vertigo-inducing, but still really cool to be following the river’s course so far above it. You can still see some of the original pathway and structures and it’s crazy to think how they built it in the first place. 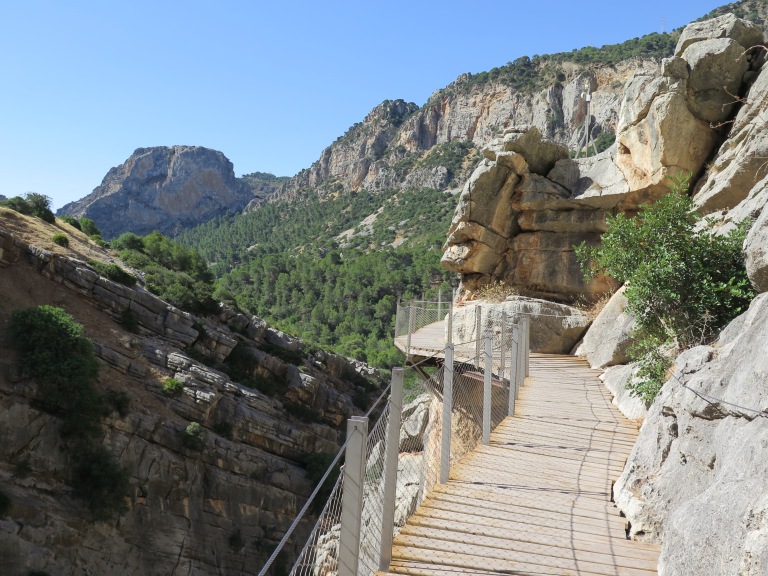 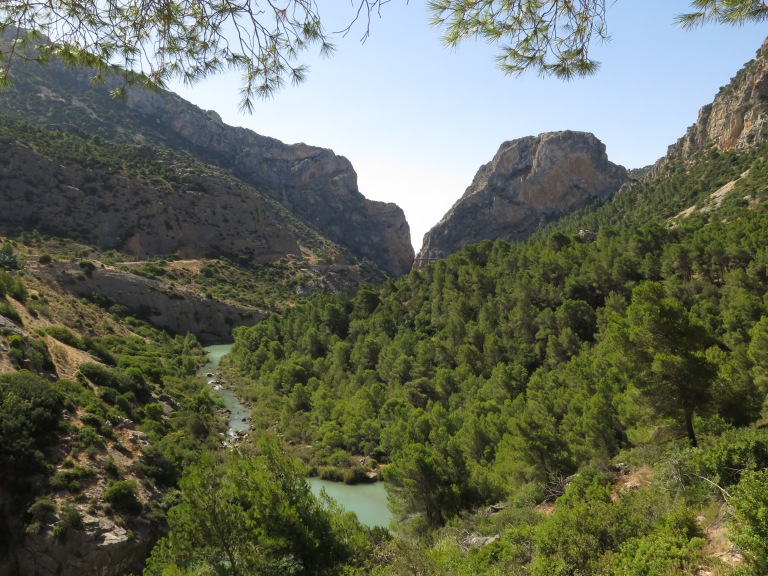 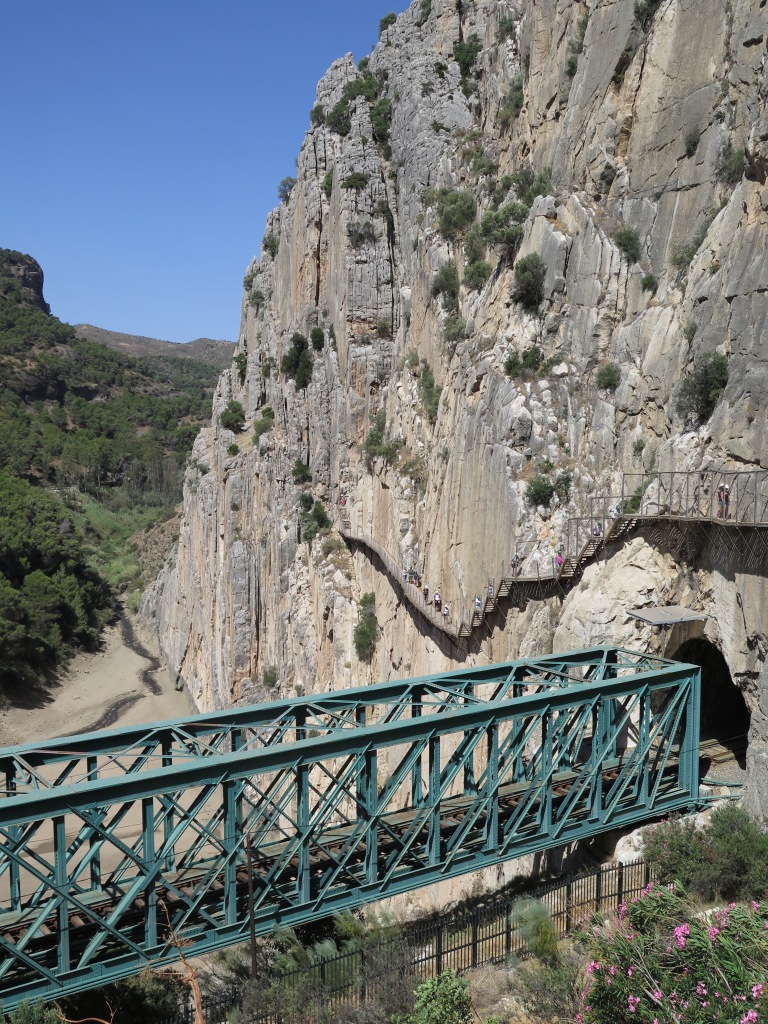 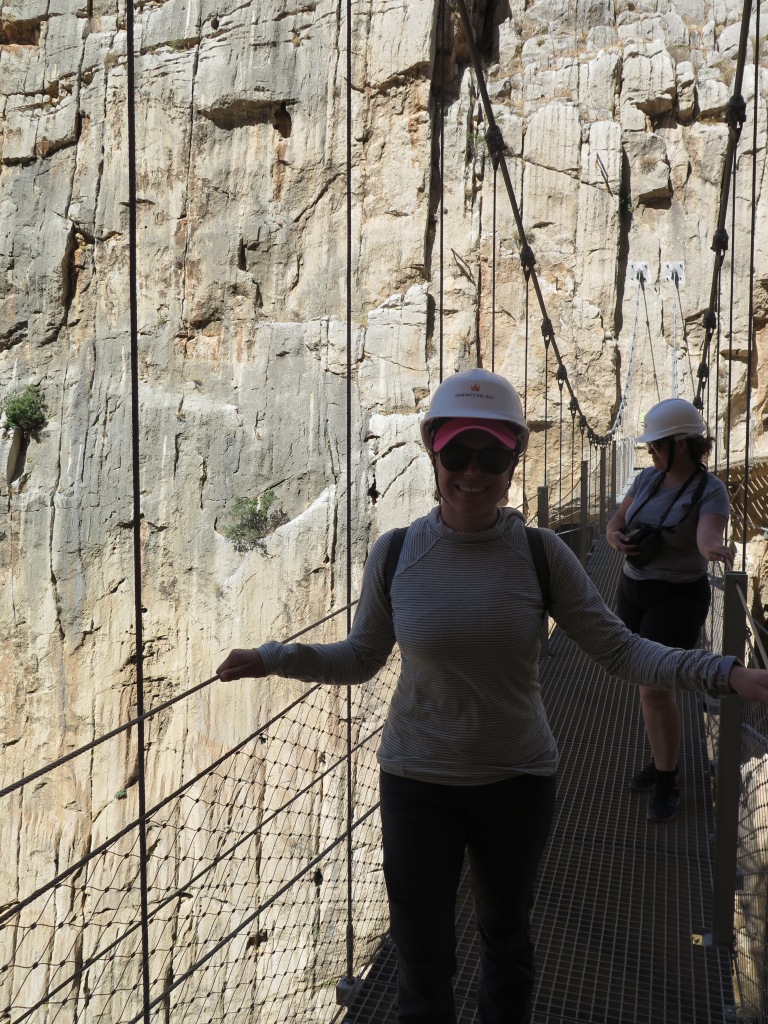 Eating: Of course! I know I’ve mentioned this before, but we were very excited to be back in a country with pork products and good wine. (Morocco being a Muslim country, pork is not consumed there and it is illegal for its citizens to purchase alcohol. But, fun fact, the king hunts boars in his forests and then that meat goes to restaurants that only serve tourists, and people are allowed to make and sell wine and beer as long as they are only for tourists.) So, we had fun tasting as many local cured pork products as we could, and even splurged for some of the famed Iberico ham, from the black pigs that are fed only on acorns. We also splurged for some Payoyo cheese, a semi-hard sheep and goat cheese made in the area that has routinely been recognized at the World Cheese Awards (which is a real thing!!!); it was delicious. 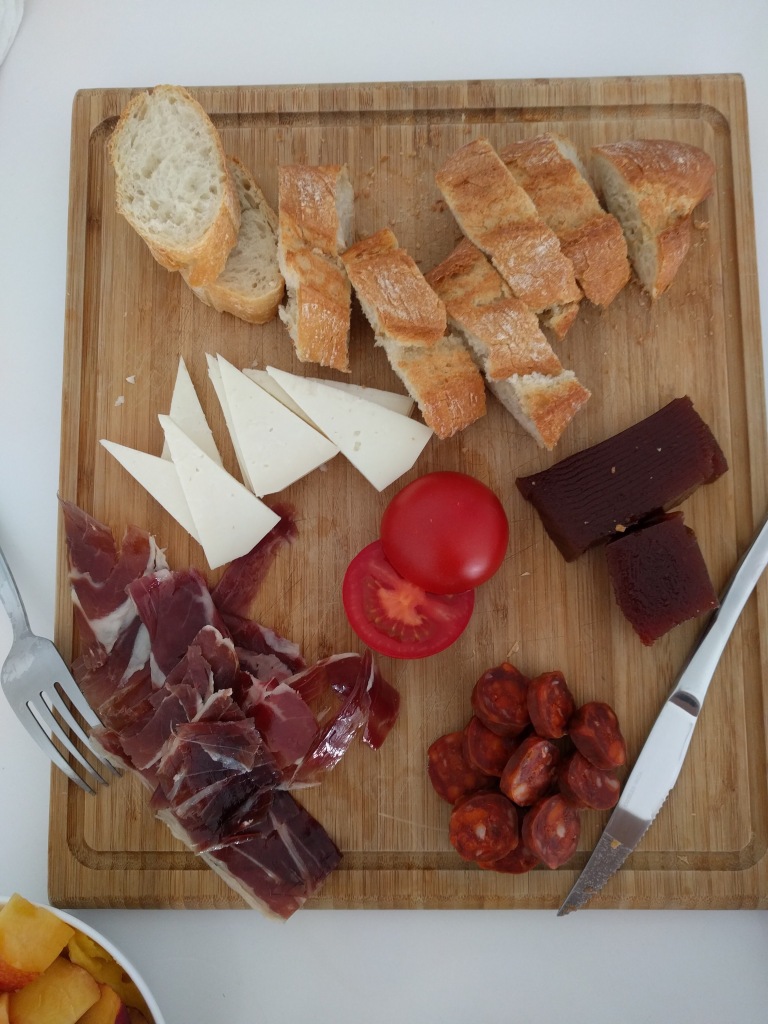 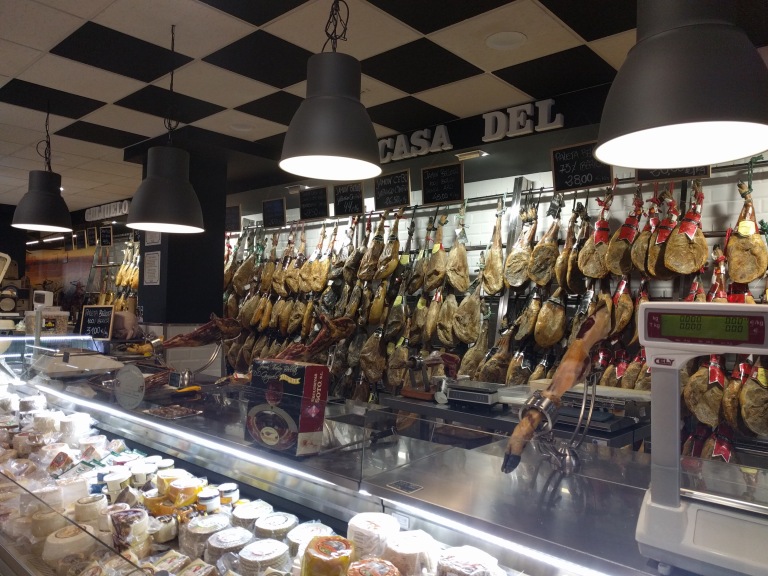 Wine by the glass in Spain was not expensive and we enjoyed getting to try many different kinds. Eating out generally was also very inexpensive which posed a conundrum for us because we were looking forward to home-cooked (and healthier) meals but there was so much good food to try and in some cases it was cheaper than cooking for ourselves. We ate mostly tapas, which is my favorite way to eat, and got to try a lot of different things. We also tried to tapear, which means going from bar to bar for drinks and tapas; like bar-hopping, but with tapas. 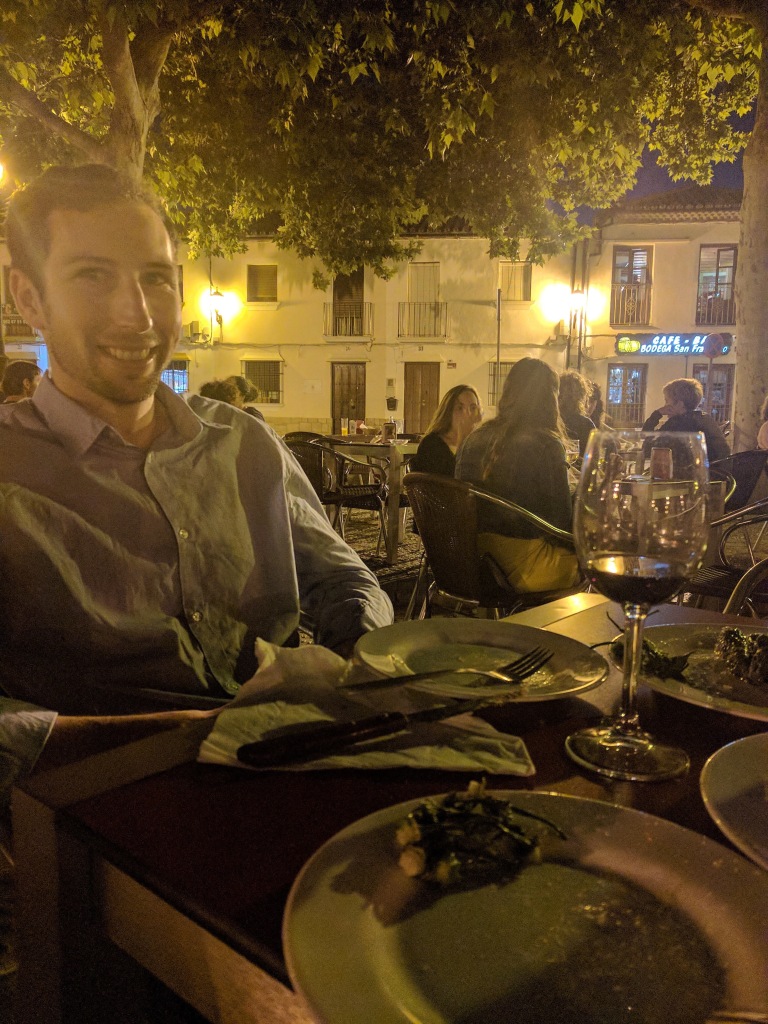 And did you know that churros are a breakfast item?!?! 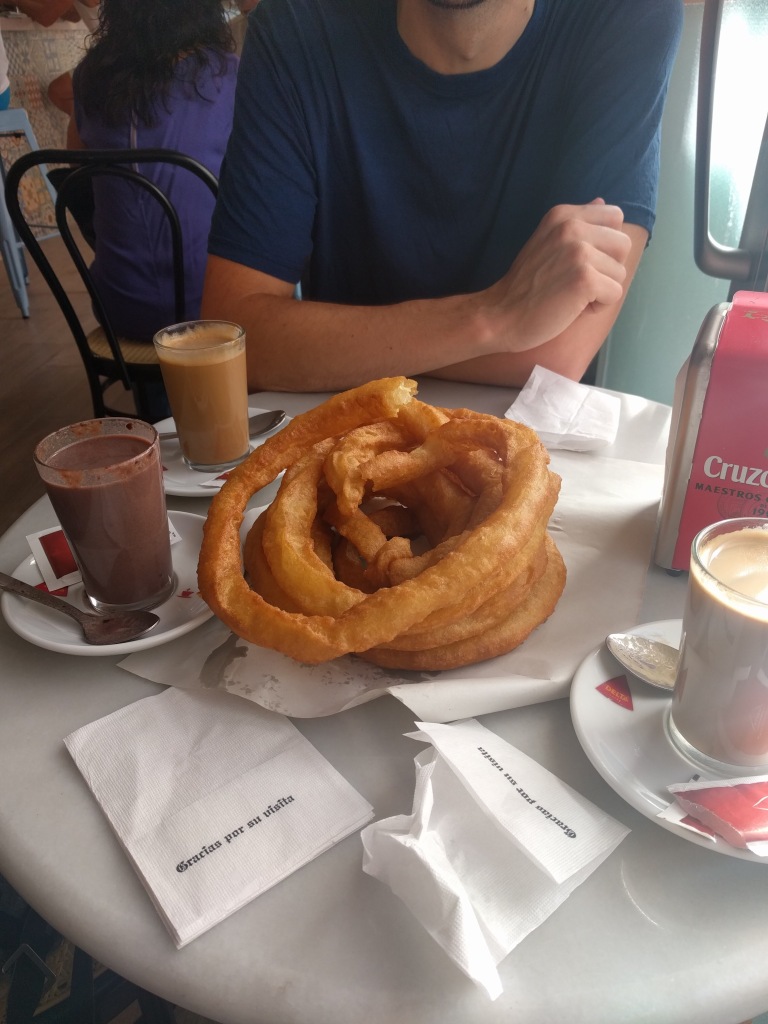 Pueblos Blancos: Throughout the Sierra de Grazalema natural park are these little towns, like Ronda, that are nestled in the hillsides or in small valleys; the buildings are all whitewashed with red tiled roofs. We spent a day driving around the park and checked out a few of the towns. Our favorite was Setenil de las Bodegas, where the structures are actually built into the rocks. 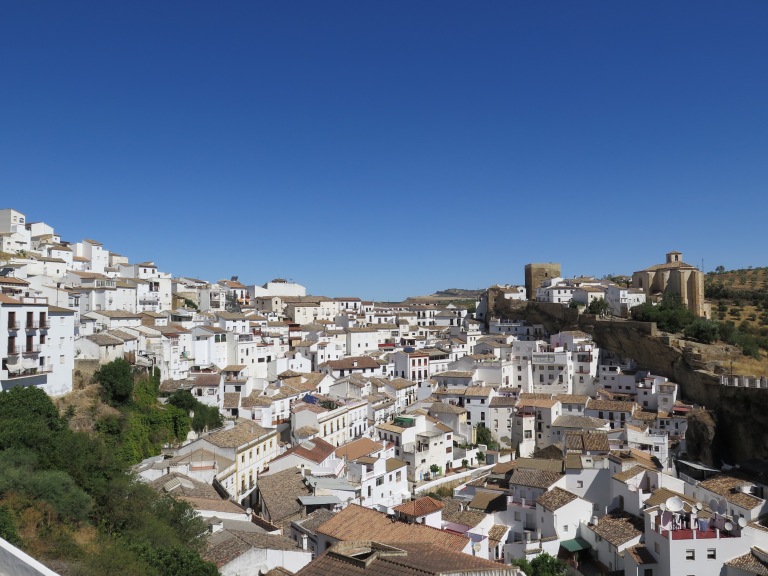 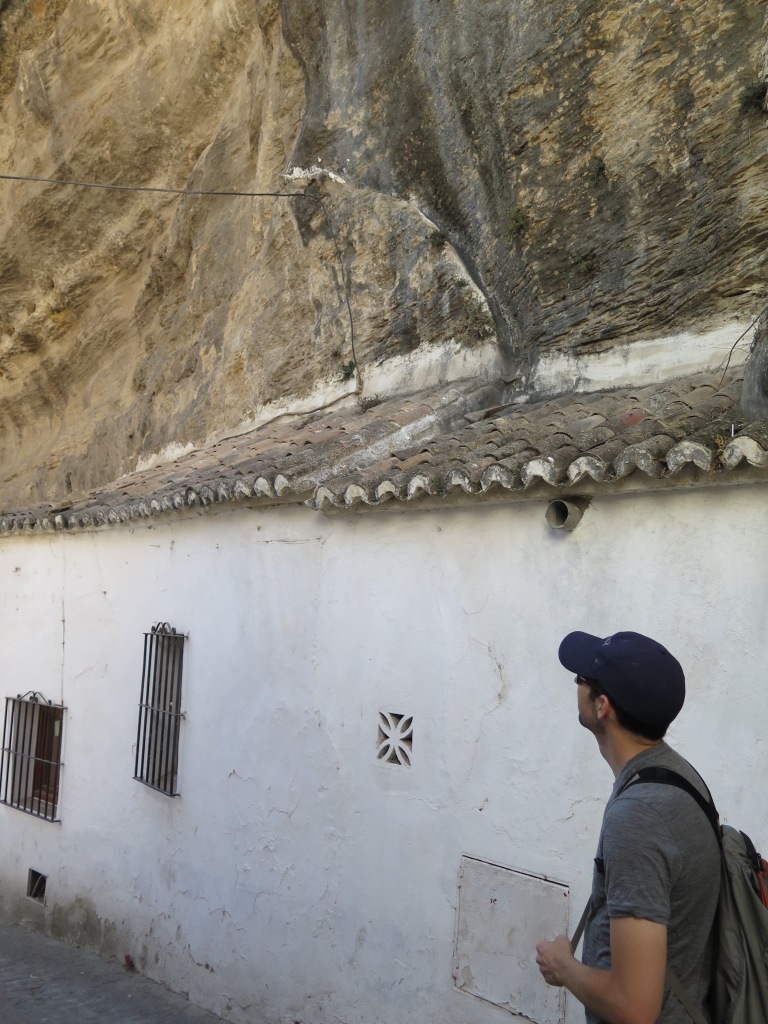 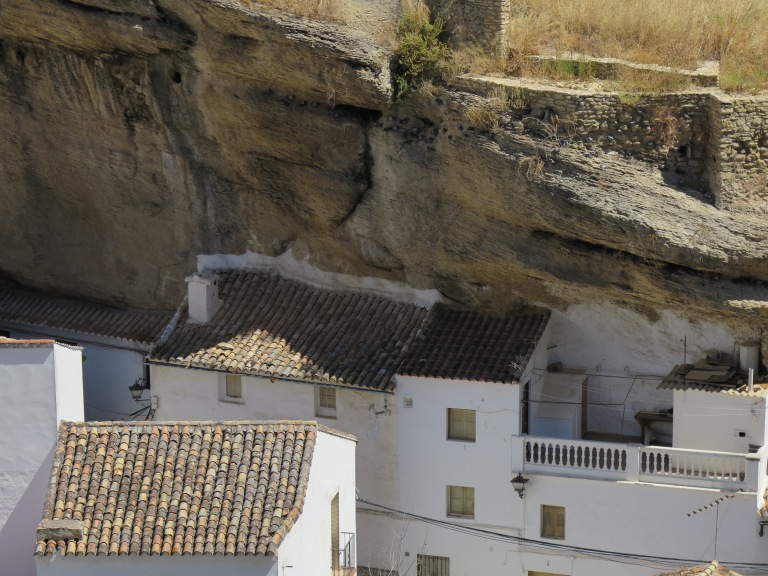 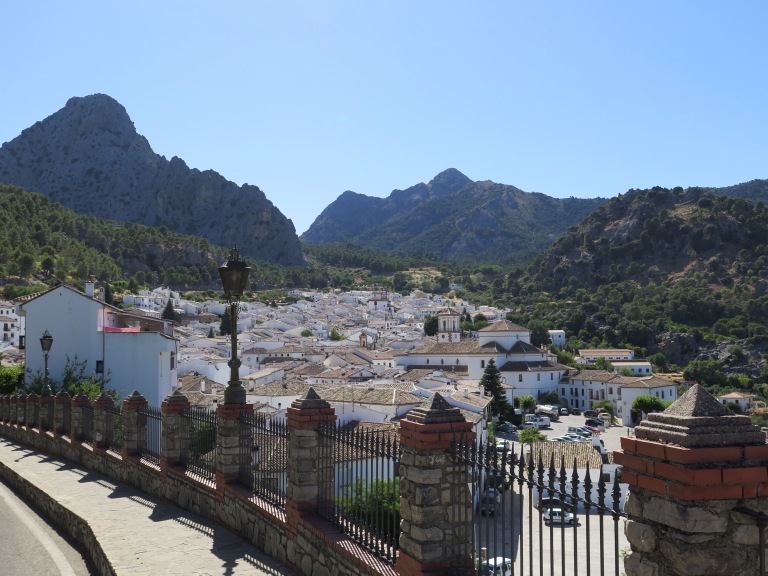 We adapted to the Spanish schedule pretty easily—perhaps, too easily—and embraced the daily siesta, eating late (-ish…), and wandering the streets at night to take advantage of the cooler temperatures. Our time in Ronda was almost exactly the experience that we had envisioned for our trip; we could have stayed for three more weeks. We’ll just have to go back!

Check out more photos of our time in Spain: Ronda, Torrecilla, Caminito del Rey, and the Pueblos Blancos. 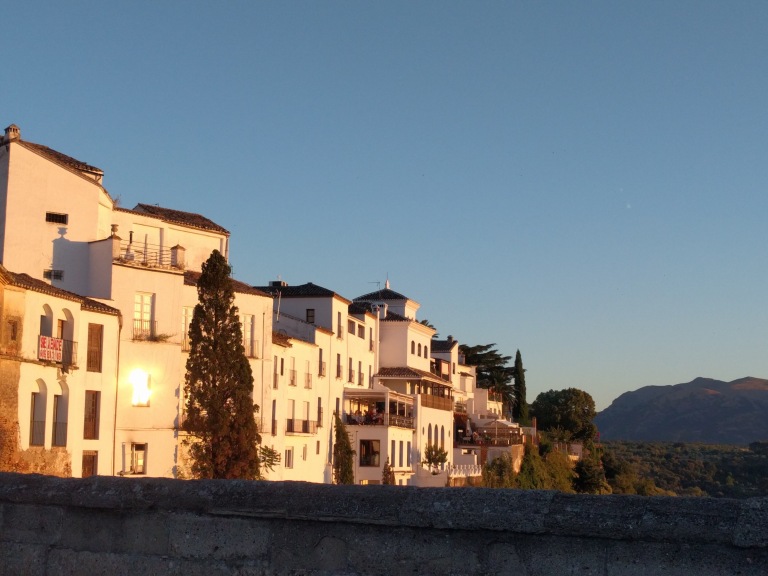 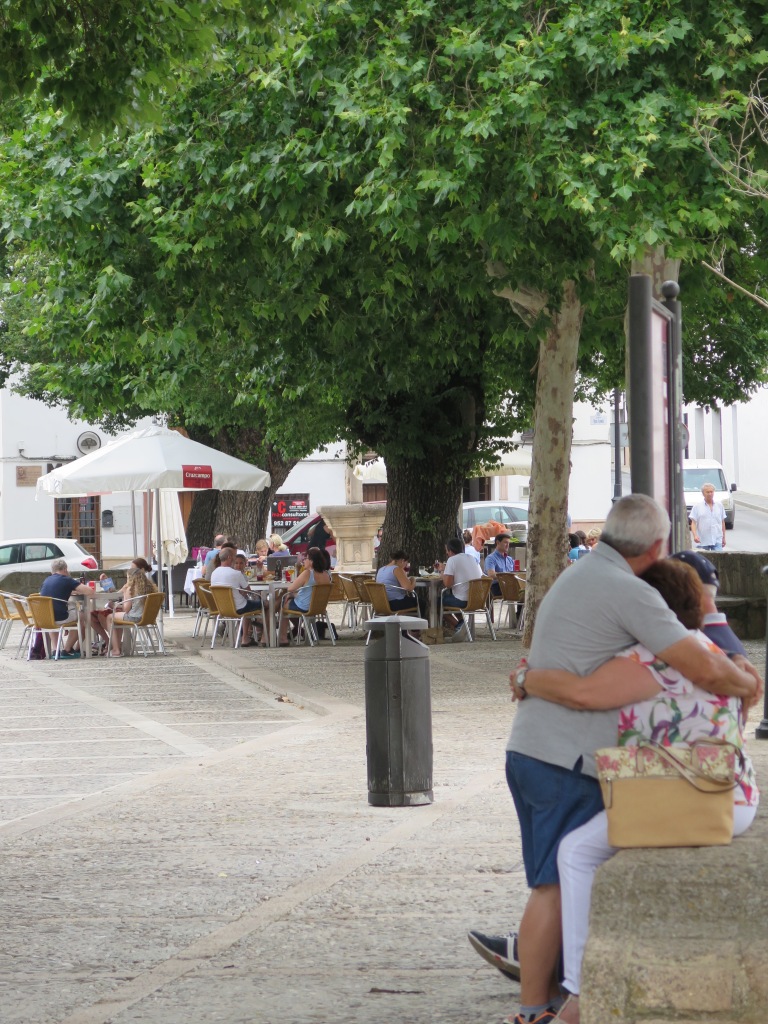 Staying on the Iberian Peninsula, we head to Lisbon next!