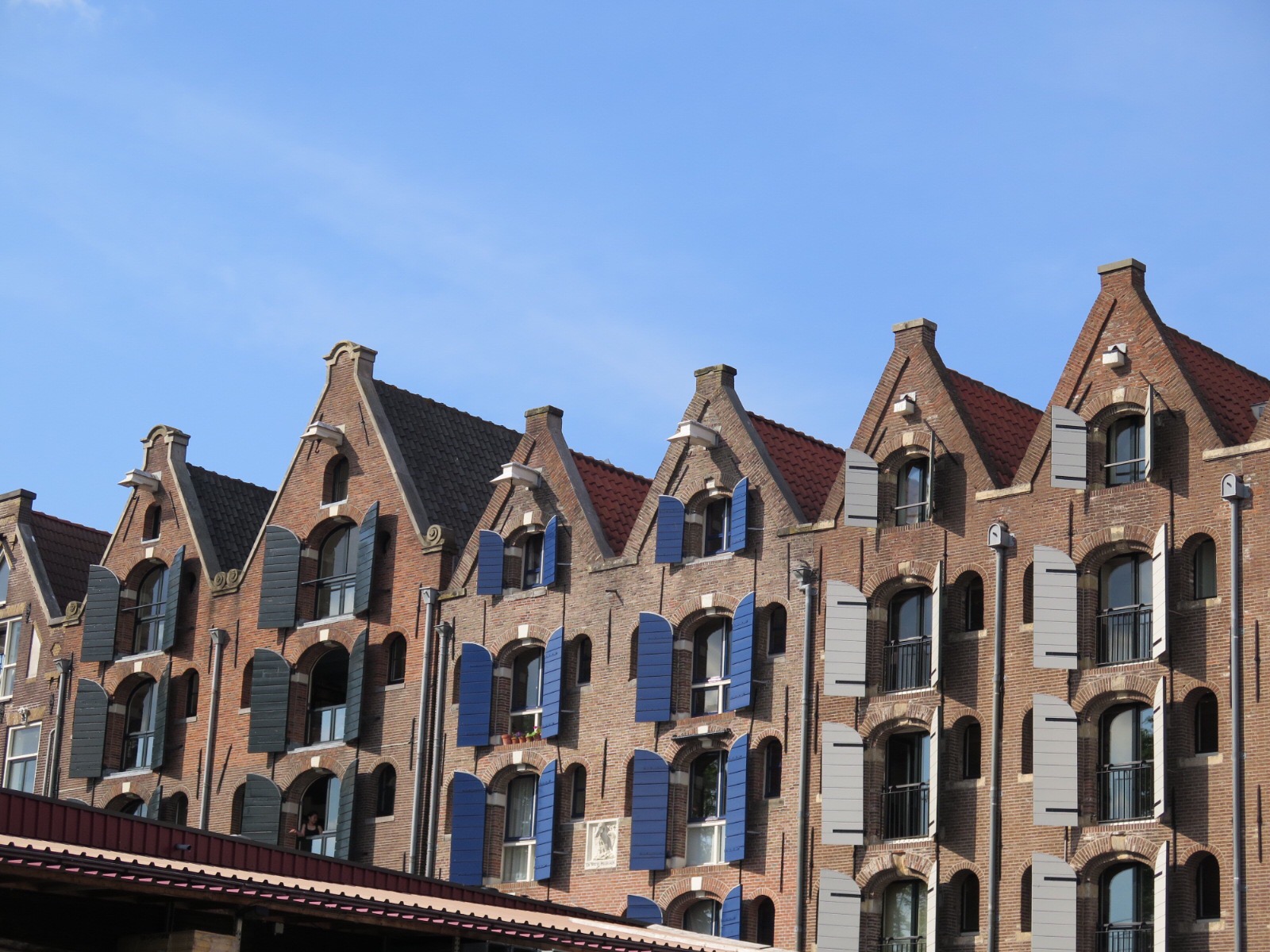 After Ireland, we spent a really enjoyable four days in Amsterdam. We loved the city and the people and wish we had planned to spend more time there! 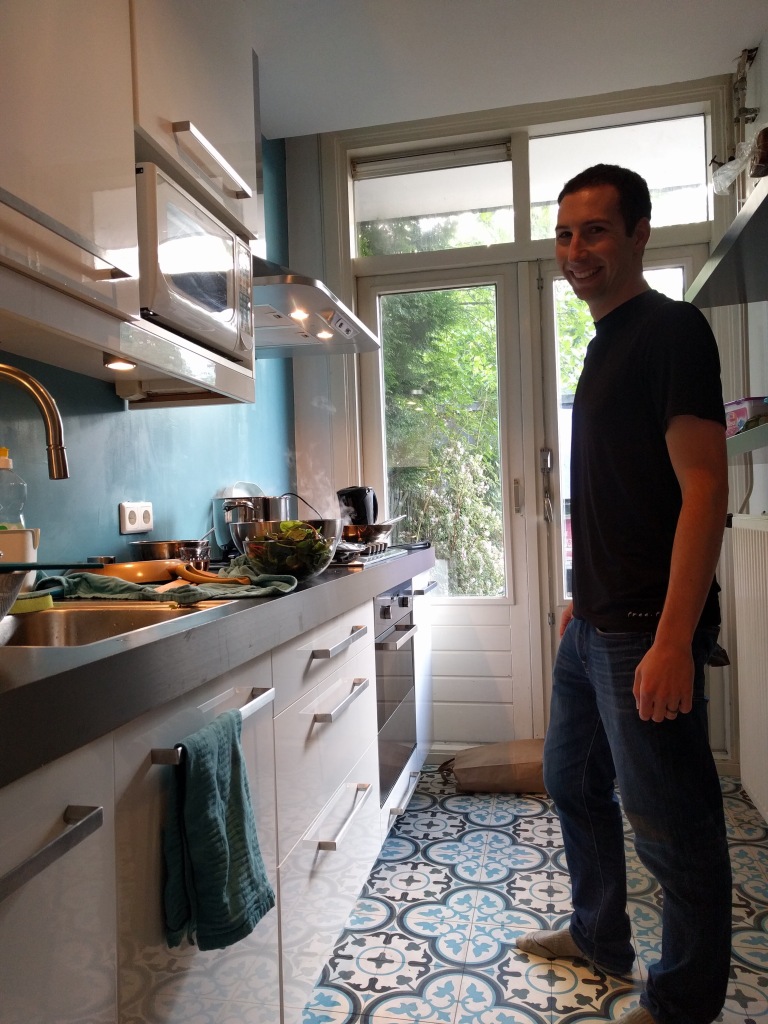 We finally had a place with a kitchen, so we were looking forward to doing some cooking and saving some money by not going to restaurants. Other than breakfasts and lunches this was our first real opportunity to cook for ourselves, something we really missed after several weeks of being on the road. Nothing makes a new place feel more like home than a self-cooked dinner. Plus, we got to go grocery shopping and I love exploring grocery stores in other countries: to see all the different produce offerings, the prepared foods, the packaging on everything, and especially all of the sweets and desserts!

Being in a big city again was a bit overwhelming. I felt too touristy and obvious to take out my camera all the time, like I had been doing for the last few weeks. The first day I also felt very short and uncool since almost everyone is über stylish and trendy, and very tall. But I embraced it and managed to have a great time anyway. 🙂 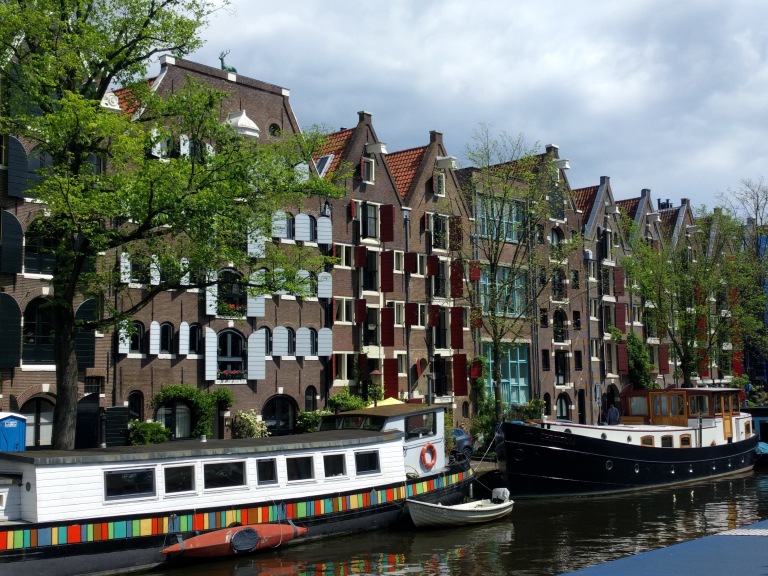 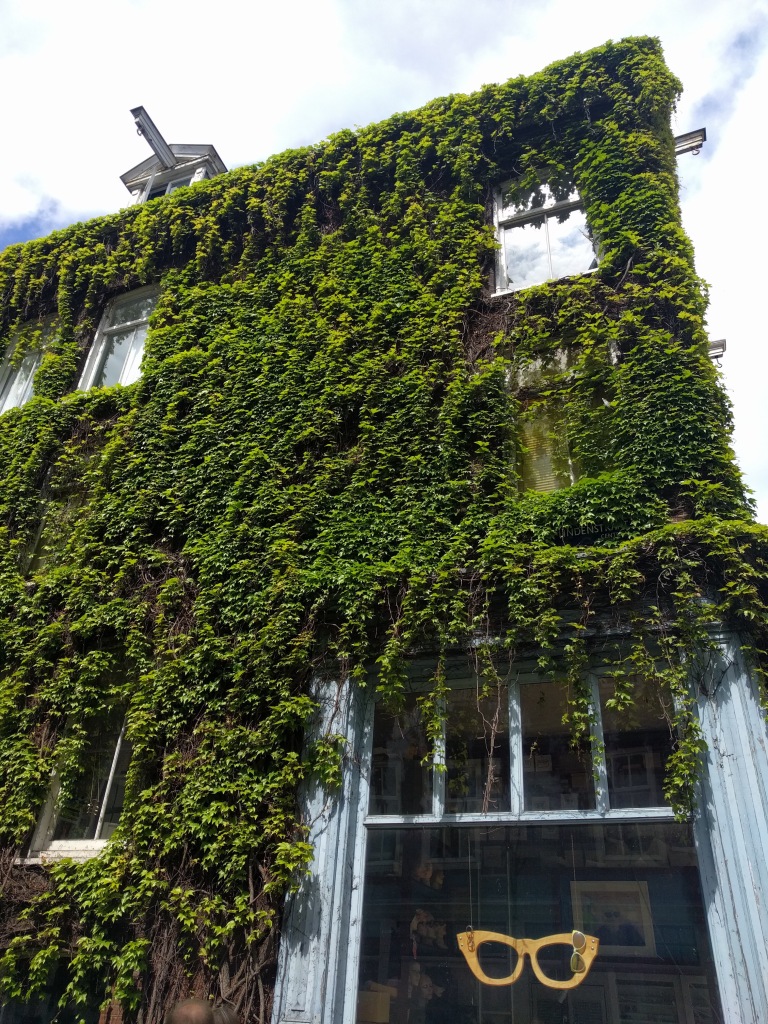 Amsterdam is a very beautiful city to explore on foot; it feels like a mix of the history, culture, and style of Paris, with the canals and quaint streets of Venice. The architecture around the canals is very entertaining: The buildings are very tall and skinny, they are all pitched forward with hooks at the top of the peaked facades, and then everything is off-kilter from the land settling. (In the 1600s building owners were taxed based on property width so to avoid higher taxes they built tall, narrow buildings. And then, in order to get bulky items up the narrow staircases, the buildings were built leaning forward hooks at the top in order to hoist stuff up through the windows without smashing into the fronts of the homes.) The result lends the city a whimsical air, and makes it a bit dizzying as you wander the canals. 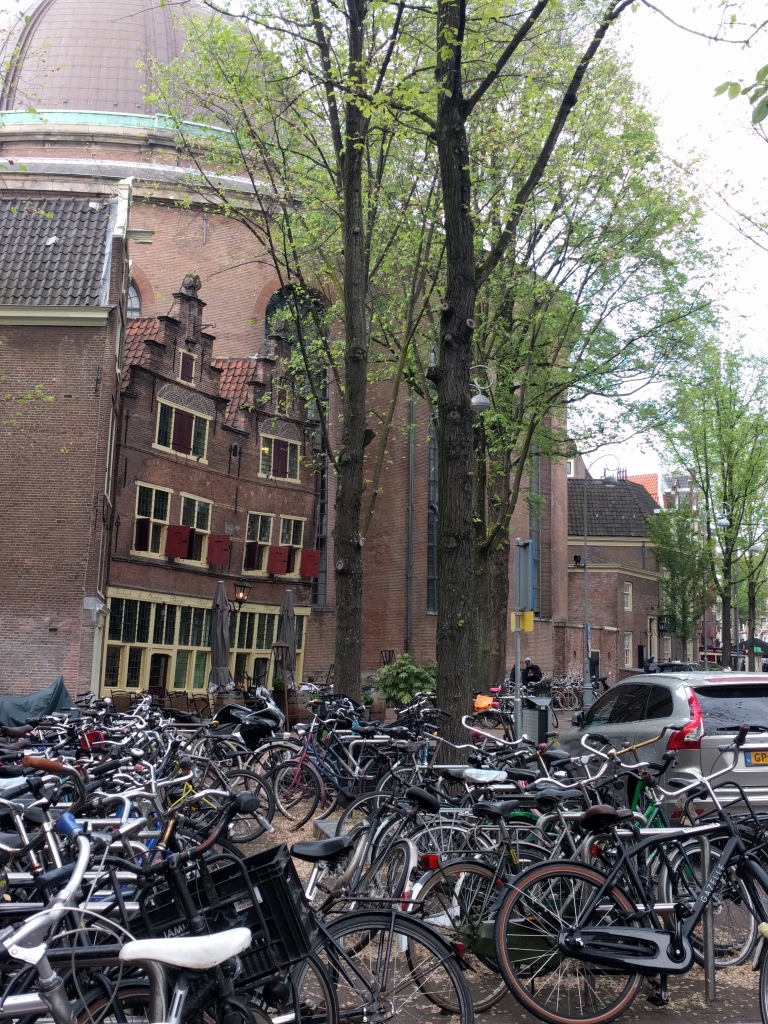 There are so many people on bicycles: They are everywhere and they do not care about pedestrians or tourists. The bikes have their own protected lane and cars, bikes, and pedestrians all have their own separate traffic lights, all of which you need to pay attention to. The bicyclists are pretty aggressive and ride pretty fast, too! We saw so many different types of child seats, trailers, cargo wagons, extra seating; we even saw families of four all on one bike.

The people of Amsterdam are very kind and friendly, and everyone speaks almost perfect, accent-less English. I think everyone learns in school, and apparently they don’t dub or subtitle any TV shows or movies so people also learn a lot that way. We had no problem communicating or getting around. 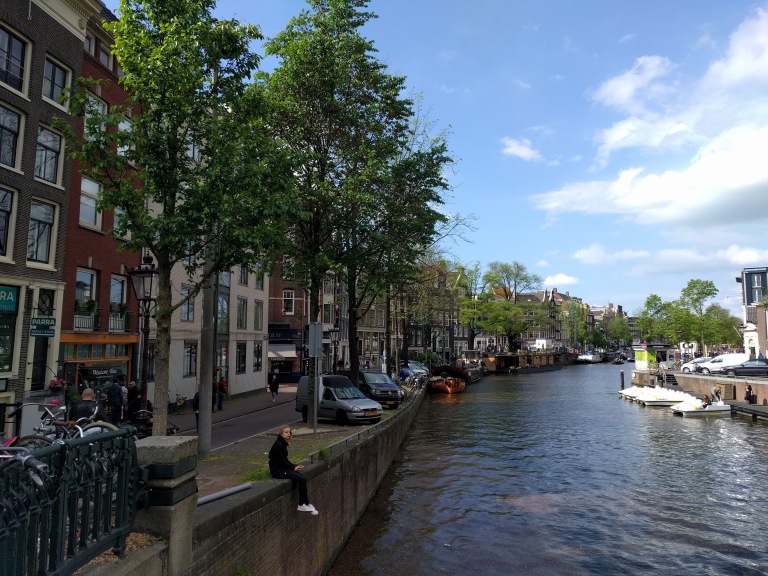 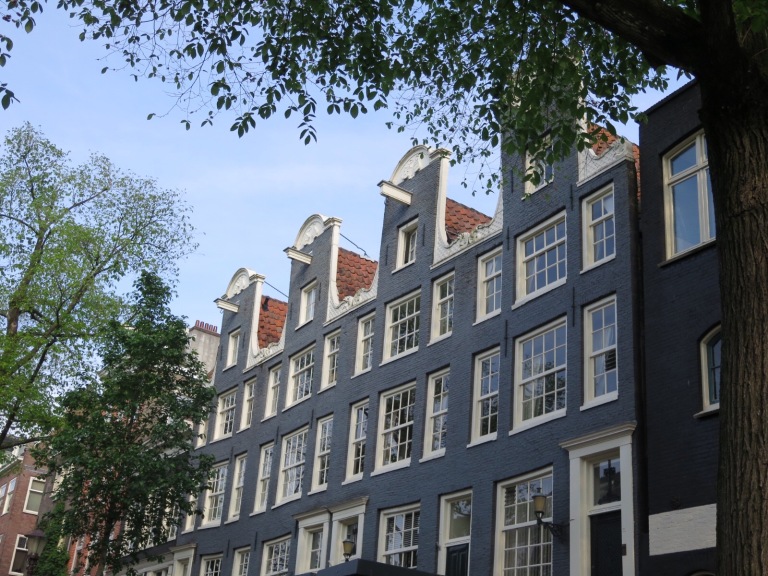 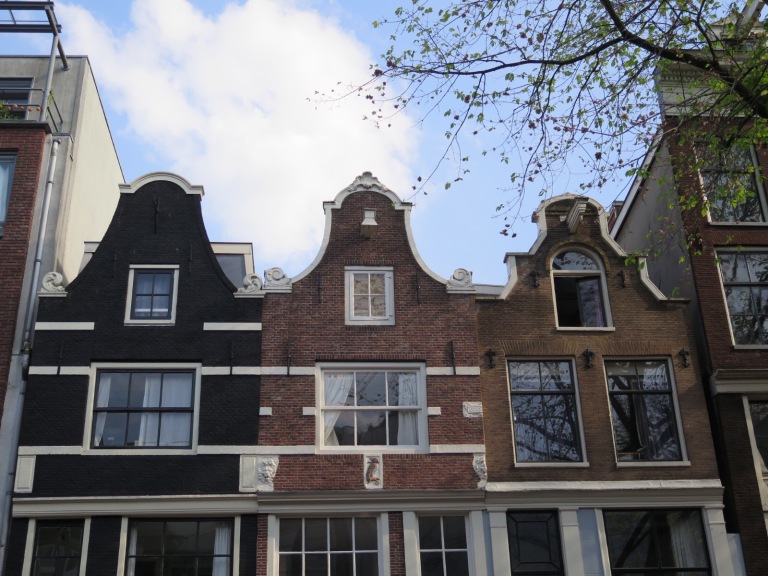 Contrary to popular belief, drugs are not legal in Amsterdam. It’s decriminalized and the government and the authorities just turn a blind eye to enforcing it. The Dutch term is gedogen and is illustrated by covering your face with your hand, but an eye peeking out between your fingers. So there are shops selling marijuana and other drugs, but they do not advertise it—they are called “coffee shops” and it’s pretty obvious. We did not visit a coffee shop. But we did kind of meander past the outskirts of the famous red-light district which is actually surprisingly family friendly during the day. Each street corner had a sign with a big stick figure holding the hand of a small stick figure, I’m guessing to tell parents to hold on to their kids? Who knows…

Some of the highlights from our time in Amsterdam:

The Van Gogh Museum – Amsterdam has SO MANY museums to choose from but I forced myself to limit it to one. The Van Gogh Museum was great, very well laid out, and we saw some beautiful pieces. The museum also has all of the letters that Vincent wrote to his brother Theo (hey-o!!!) which were very neat to read.

Markets – We spent a fair amount of time just wandering through different street markets. The markets are a combination of farmers market, flea market, craft fair, antiques market, drugstore, thrift shop, and food trucks so it’s really neat to meander through them. 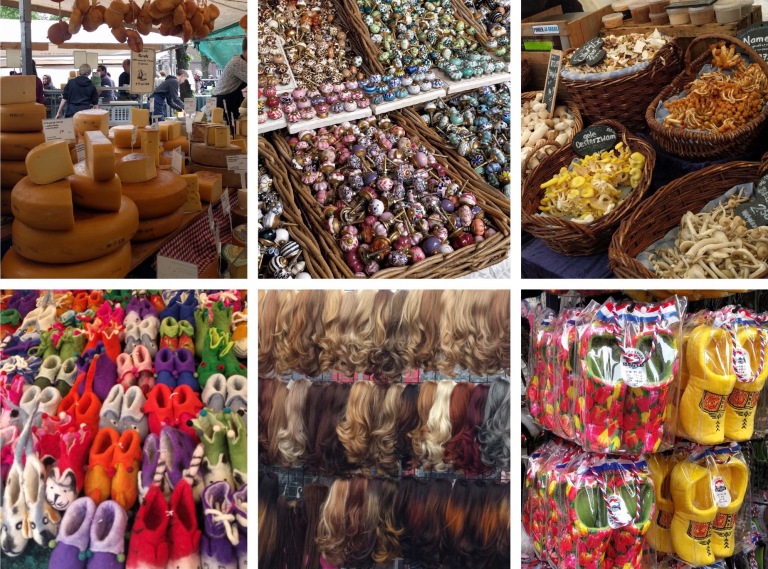 The Albert Cuyp market was lots of fun: Vendors selling everything from fruits and veggies to faux designer clothes, from local cheeses to souvenirs and tourist tchotchkes, from freshly made local favorites (stroopwafels, and Filipino lumpia…?) to soap and shampoo. It was definitely quite touristy and very busy, but still fun to look at all the different wares, local and otherwise.

The Noordermarkt and Lindengrachtmarkt, recommended to us by a friend who had lived in Amsterdam, were also very cool and the day we wandered through those we got some things to make a yummy dinner one night. 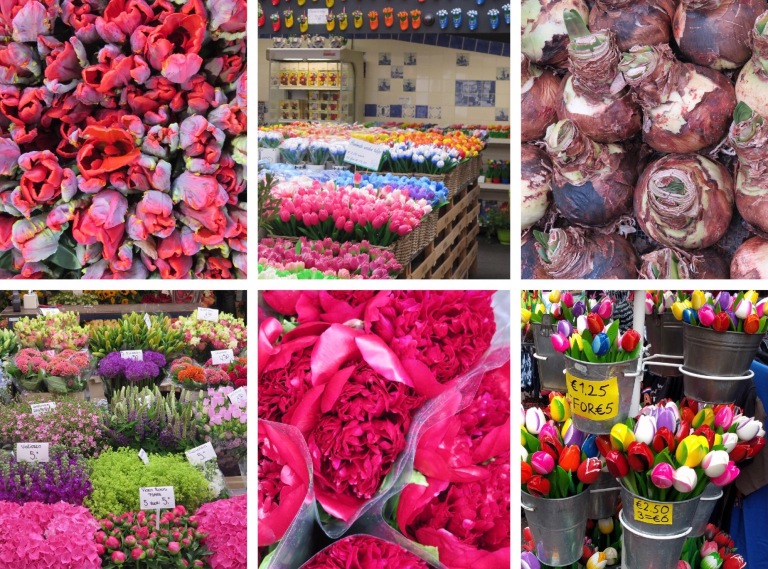 The Bloemenmarkt, the flower market, was a bit of a let-down. Since Holland is known for its tulips, I envisioned walking through aisles of brightly colored blooms. Perhaps we were just too early in the year, but most of the stalls were just selling flower bulbs, souvenirs, and fake flowers (wooden and silk). And it was packed with tourists.

Food – I don’t think Amsterdam is known for having wonderful regional cuisine, but we did find some really excellent dishes!

Stroopwafels: Stroopwafels are two thin and slightly chewy waffle-cookies sandwiched around warm, gooey caramel. The best were the ones we got freshly made at the markets, when they were still warm, pliable, and sticky, and roughly the size of my face; they are DELICIOUS but definitely a very indulgent snack! They sell packs of (smaller sizes of) stroopwafels all over the city which are almost as good as the fresh ones when you heat them up (which we tested!).

Pannekoeken: Our friend who lived in Amsterdam for a while told us about pannekoeken—traditional Dutch pancakes—and suggested a touristy-but-still-authentic restaurant, aptly named The Pancake Bakery. The pannekoeken were delicious and so much better than the Dutch baby pancakes I’ve made at home. We shared a savory one (cheese and bacon) and a sweet one (Nutella and banana), and they were huge and so satisfying.

Beer: We did a little bit of day-drinking while in Amsterdam and found some good beers. One afternoon we took the (free!) ferry across the river to the formerly-industrial part of the city and went to a bar made out of some old freight containers. And another day we found our way to a local brewery (Brouwerij ‘t TJ), and enjoyed a tasting flight while sitting beside a giant old windmill. 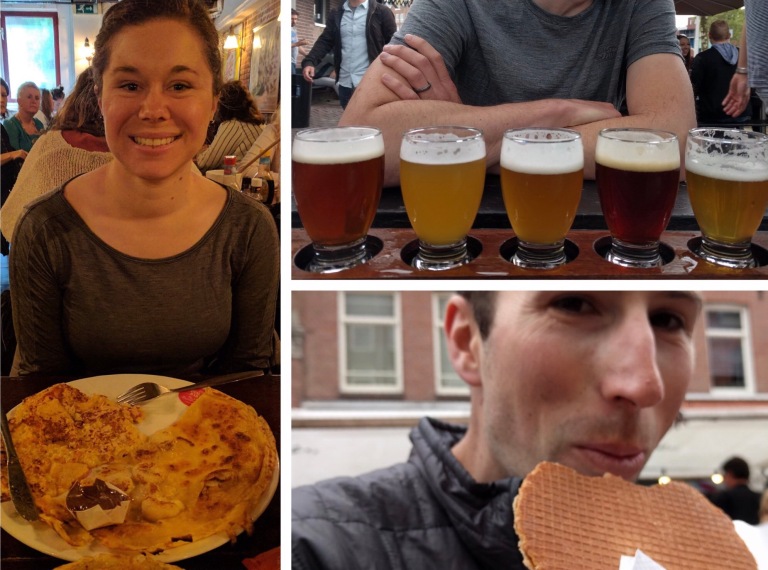 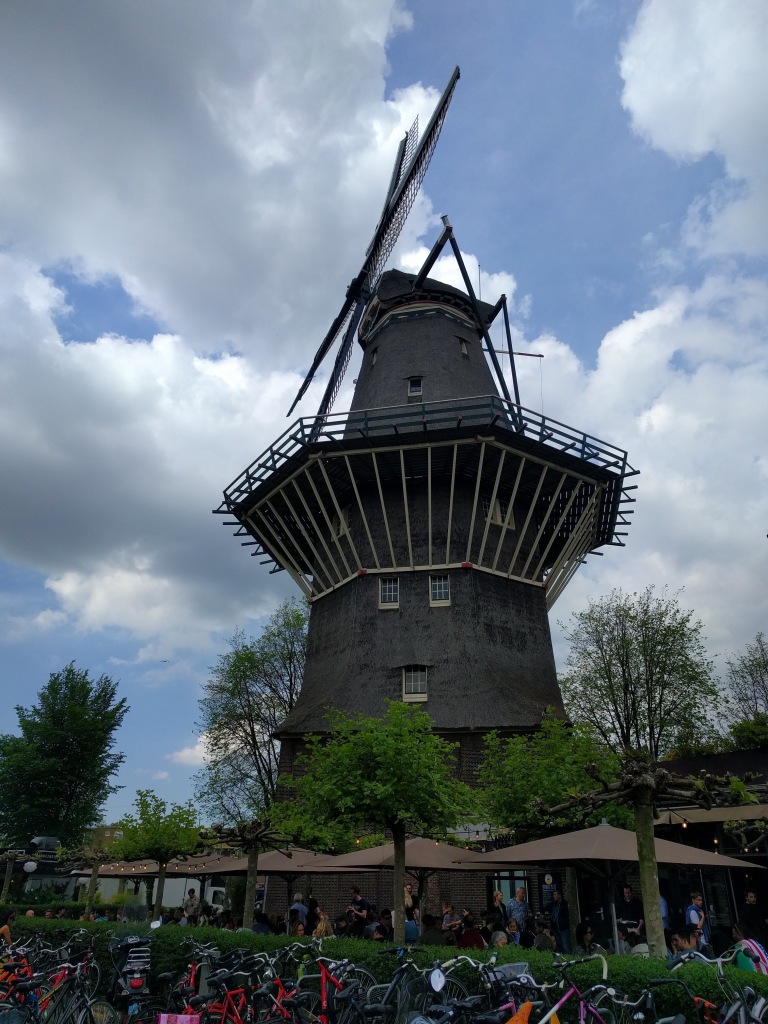 Vondelpark – We spent part of Sunday wandering around Vondelpark, a large and beautiful park in the southwest part of the city. It is like a smaller version of Central Park: lots of pathways to follow, streams and ponds to sit by, wide lanes for biking and rollerblading, outdoor cafes, carousels and activities for kids, open fields of grass to picnic on. We were soaking up some sun when another tourist sat down next to us and proceeded to open up a packet of magic mushrooms, read the included instructions, and eat them. He asked if we had done that yet (nope, and no plans to do so), and said that he had gotten the recommendation to take them while hanging out in the park… (We saw him at the train station the next day, but he didn’t recognize us.) 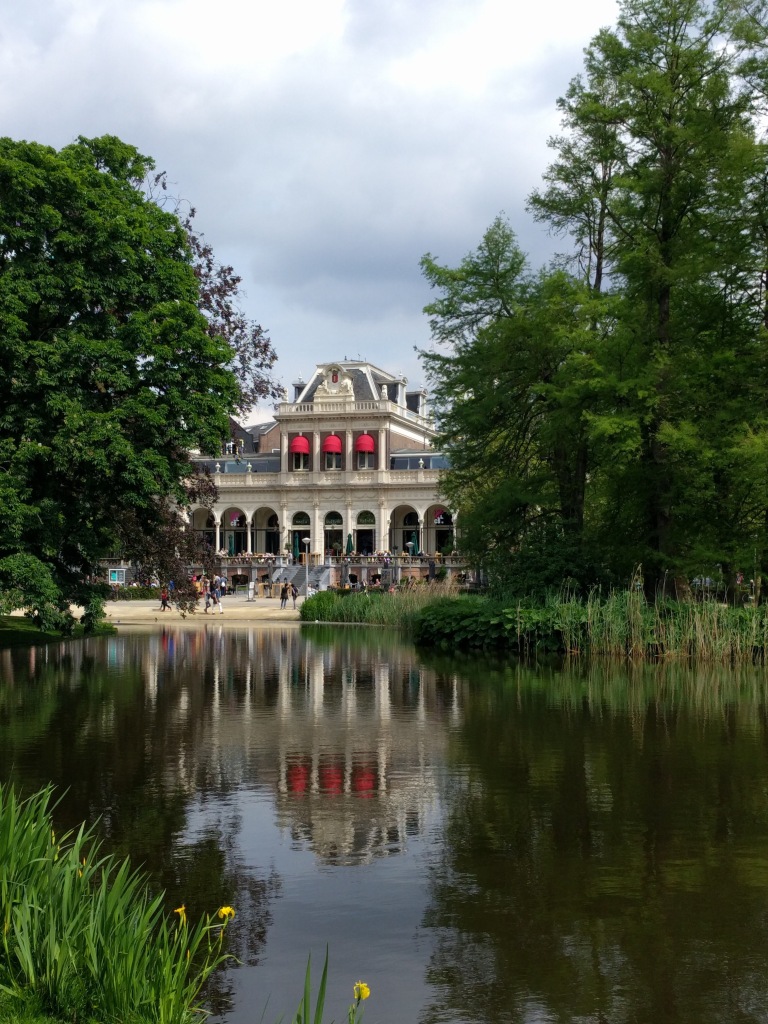 Canal tour – The heart of Amsterdam is a maze of canals and we explored them on a boat tour, which was actually a lot better than it sounds like. There were just a handful of us on a small boat and we enjoyed a little picnic and some wine while listening to our guide tell stories about the city. It was a very nice way to see the city and learn more about it from a local. And one of the people who started the tour company is from El Cerrito! Small world. 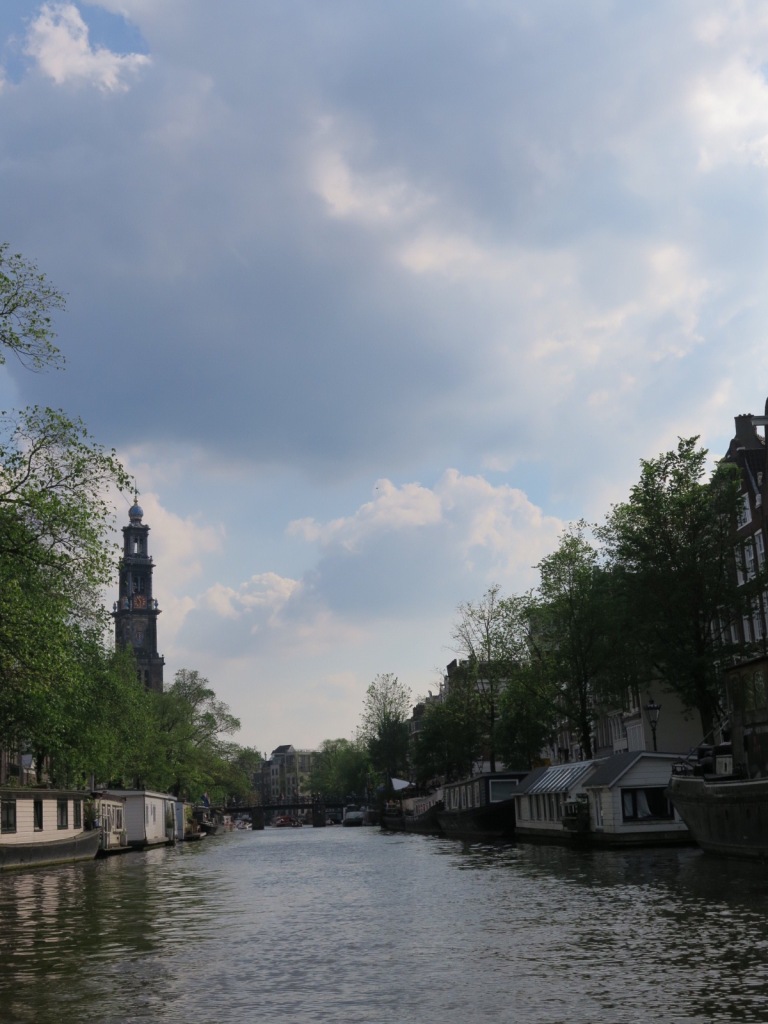 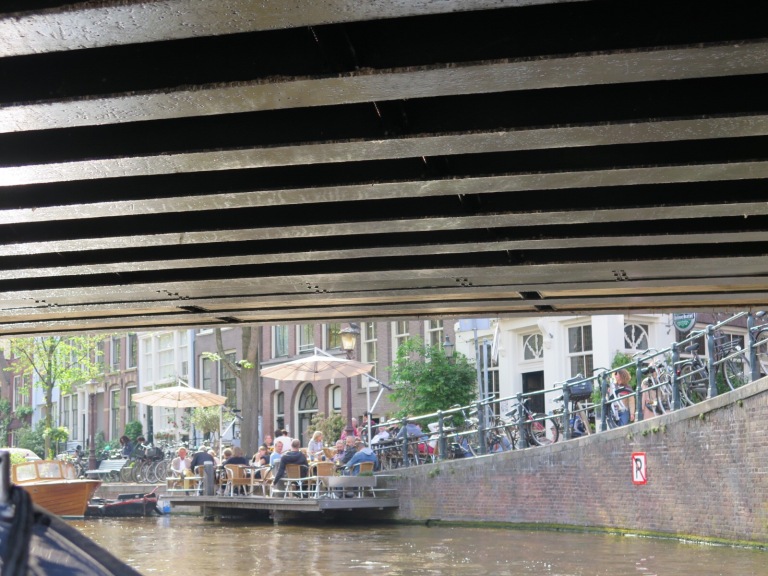 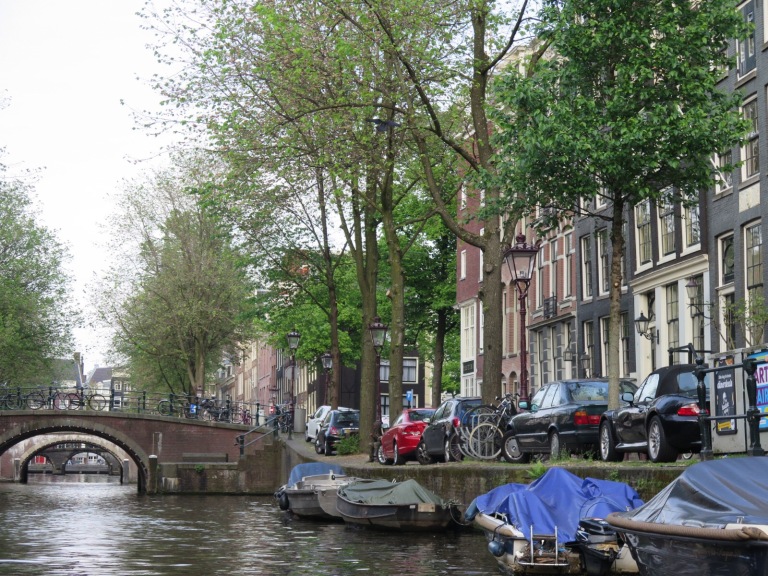 Part of experiencing the Dutch culture is experiencing the feeling of gezellig—untranslatable in English, it can mean the feeling you have when you are in a fun or convivial atmosphere, in a happy or cozy place, with loved ones or friends you haven’t seen in a while, or more generally a feeling of well-being that comes from togetherness. I think we got a little taste of this at some cafes that we visited, and also definitely felt it at the apartment where we stayed.

Amsterdam is a very vibrant and interesting city and I think we will be visiting again! Check out more of our pictures here. 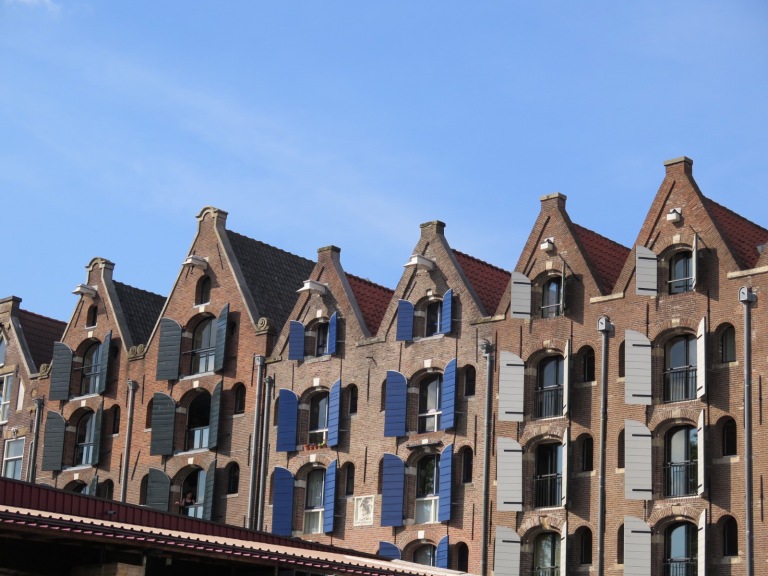 Next time, we try to find all the beer in Bruges!